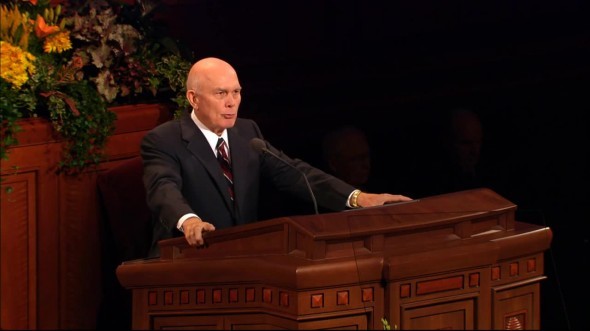 When the prophets, apostles, and leaders of The Church of Jesus Christ of Latter-day Saints congregate every six months to speak to the world, members and nonmembers are invited to tune in and hear their inspired counsel. With so many ears to hear, hearts to listen, and minds to enlighten, Church leaders turn to the Spirit.

"Perhaps you already know (but if you don't you should) that with rare exception, no man or woman who speaks here is assigned a topic. Each is to fast and pray, study and seek, start and stop and start again until he or she is confident that for this conference, at this time, his or hers is the topic the Lord wishes that speaker to present regardless of personal wishes or private preferences. Every man and woman you have heard during the past 10 hours of general conference has tried to be true to that prompting. Each has wept, worried, and earnestly sought the Lord’s direction to guide his or her thoughts and expression."

For those congregated in the Conference Center, church buildings, or homes, we may easily forget the experience from the other side of the pulpit. Most viewers don't see how much effort goes into even one conference talk or the pressure of speaking as the Lord would speak.

"Well, it's probably one of the most uncomfortable things, most out-of-my-comfort-zone kind of things, that I was asked to do. I remember the first time I stood up in the Conference Center. I was conducting the general women's meeting at the time, and as I was sitting there I was watching the clock tick by and when there was one minute left and I knew I had to stand up, I started to panic. I turned to my counselor Carole McConkie and said, 'I don't want to do this.' She kind of got a panicky look and said, 'Well you don't have a choice; you have to.' There are moments like that when you say, 'What am I doing here and how can I, just a normal person, be doing what I've seen these people I admire all my life do?' The clock does hit that point and the little sign does go on that says stand up and so you walk to the pulpit and something kind of miraculous happens when you step up to that pulpit. I call it the bubble of protection. There is something that surrounds you when you stand up there and you feel calm, and you feel peace, and you know you're not alone."

In a discussion with Sheri Dew on the Mormon Channel in March 2016, Elder Dallin H. Oaks described the feeling of responsibility he experiences in speaking as a prophet, seer, and revelator for the Lord.

"[It's] an immense responsibility. It’s probably the single greatest worry that I have, because I know that there are many people out there who take so very seriously the things that I say, and I've just got to be 100 percent sure that what I'm saying is what the Lord wants me to say. And that's a very, very heavy burden. I approach that, in the case of general conference talks, by just praying fervently that I will know what I'm supposed to speak about at the next conference."

How Do Apostles Prepare Their Conference Talks?

"I begin that process six months in advance, and usually by two to four months ahead of the April or October conference, I know the subject I'm supposed to speak about. It's indelibly impressed upon my mind, and then I have that confirmed because thoughts begin to flow on that subject—sources come to my attention . . . sometimes I receive a letter from a member that gives me an important insight on the subject—and then I begin writing drafts."

Referring to himself as "a compulsive editor of everything that comes under [his] eyes," he writes an average of 12 drafts per conference talk. "I've never given a talk in general conference where I had less than eight distinct drafts, . . . and I've had as many as 15 when I was speaking on an extraordinarily difficult subject. And that takes, of course, a couple of months, and a very good, patient secretary."

In his drafting process, he reads his talk to his wife, Kristen, and shares it with other General Authorities to get other points of view. He said, "[Inevitably] they will say, 'You've said this, but you might be understood as saying that. Don't you think you better clarify?' . . . I get good help along the way."

Elder Oaks and Elder Holland were not the only Church leaders to refer to the long, intense process of preparing a message for general conference.

"These conferences are always under the direction of the Lord, guided by His Spirit. We are not assigned specific topics. Over weeks and months, often through sleepless nights, we wait upon the Lord. Through fasting, praying, studying, and pondering, we learn the message that He wants us to give.

"Some might ask, 'Why doesn’t the inspiration come more easily and quickly?' The Lord taught Oliver Cowdery, 'You must study it out in your mind; then you must ask me if it be right.' Conference messages come to us after prayerful preparation, through the Holy Ghost."

"For the First Presidency and the Twelve, who normally speak each conference, the enormous responsibility of preparing their messages is both a recurring burden and a sacred trust. . . .

When and how does the inspiration for general conference talks come?

With no topics assigned, we see heaven beautifully coordinating the subjects and themes of eternal truth each and every conference.

One of my Brethren told me that his subject for this conference was given to him immediately after his talk last April. Another mentioned three weeks ago that he was still praying and waiting upon the Lord. Another, when asked how long it had taken to compose an especially sensitive talk, responded, 'Twenty-five years.'

At times the central idea may come quickly, but the content and details still require enormous spiritual climbing. Fasting and prayer, study and faith are always part of the process. The Lord wants no pretense diminishing His voice to His Saints.

Direction for a general conference talk often comes in the night or the early morning hours, when the talk is far from the thoughts of the mind. Suddenly, unanticipated insight and, at times, specific words and phrases flow as pure revelation.

As you listen, the messages you receive may be very literal or they may be customized just for you. . . .

I promise you that as you prepare your spirit and come with the anticipation that you will hear the voice of the Lord, thoughts and feelings will come into your mind that are customized especially for you. You have already felt them in this conference, or you will as you study the messages in the weeks ahead."

In the April 2016 general conference, President Henry B. Eyring said, "The music, the talks, and the testimonies have been prepared by servants of God who have sought diligently for the Holy Ghost to guide them in their preparation. They have prayed longer and more humbly as the days of the conference have approached."

The scriptures also describe the spiritual process of determining topics to share in meetings. In Doctrine and Covenants 46:2, the Lord says, "[It] always has been given to the elders of my church from the beginning, and ever shall be, to conduct all meetings as they are directed and guided by the Holy Spirit."

Whichever topic the prophets, apostles, and Church leaders prepare and address over the pulpit, Elder Holland shared their first and most important responsibility: