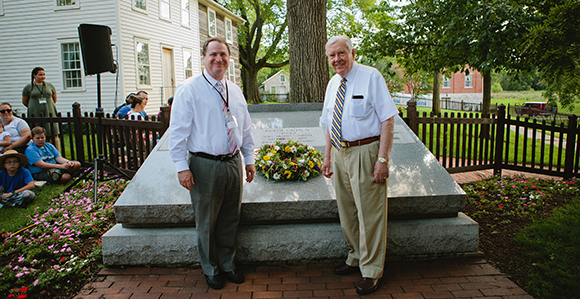 What a sweet example of two faiths finding commonalities and coming together to celebrate their shared past.

Two apostles—Elder M. Russell Ballard of The Church of Jesus Christ of Latter-day Saints and Elder Lachlan Mackay of the Community of Christ (both descendants of Joseph Smith Sr. and Lucy Mack Smith)—met with more than 400 cousins in Nauvoo, Illinois, on August 6 to commemorate the 25th anniversary of the Smith families coming together to beautify, enlarge, landscape, and increase access to the Smith Family Cemetery.

During the ceremony, the family also placed a marker to honor Lewis C. Bidamon, Emma’s second husband and the last to be buried in the cemetery. Elder Mackay spoke of Bidamon’s welcoming generosity, his humor, and his caring of Emma’s sons. “For raising [Joseph Smith Jr.’s] children I will be eternally grateful. I am just thrilled we are finally able to mark Lewis’s grave,” Elder Mackay said.