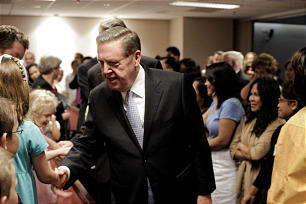 Apostles visit Asia; a great frontier of the Church

Two Apostles recently toured several Asian nations — meeting with thousands of members and witnessing, perhaps, the Church's "pioneer" moments in a region of the globe that half the human population calls home.

"Everywhere we went there was a wonderful [spirit]," said Elder Jeffrey R. Holland, who was joined in Asia by Elder David A. Bednar, members of Quorum of the Twelve Apostles. "The members in Asia are out on the periphery of the Church and don't see the visiting Brethren that often, but they were wonderfully courteous and responsive. We came home just thrilled."

The Church in Asia is young but growing, observed Elder Bednar, adding, "It's a thriving part of the world where the Church is influencing for good the lives of millions."