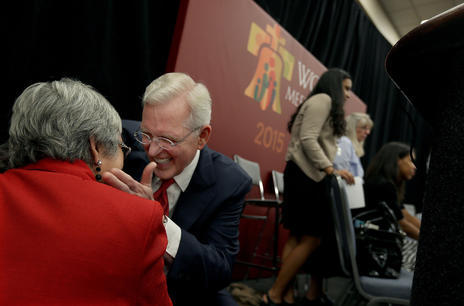 Two LDS families who were part of Elder D. Todd Christofferson's presentation Thursday at the World Meeting of Families 2015 stole the show and earned the praise of the Archbishop of Philadelphia, Charles J. Chaput.

The Catholic archbishop of Philadelphia praised Mormon families on Thursday at the World Meeting of Families and thanked the LDS Church for a significant financial contribution to the event.

"When we planned this, we tried to reach out to different faith communities to get some help on how to be good families, and I don't think anybody does it better than the Mormon community and the Latter-day Saints," said Archbishop Charles J. Chaput. "We have a lot to learn from you, and I'm grateful you're willing to help teach us."

The archbishop made the comments in the middle of a presentation by Elder D. Todd Christofferson of the Quorum of the Twelve Apostles of The Church of Jesus Christ of Latter-day Saints.