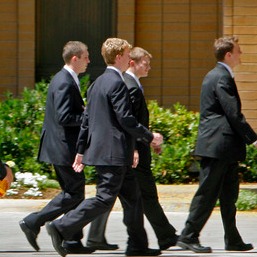 First came the surge. Next comes the settling.

The Mormon missionary force began to balloon almost from the moment the LDS Church lowered the service age, jumping from 58,500 then to nearly 86,000 today.

That number is expected to plateau at about 88,000 this fall, David F. Evans, head of the Missionary Department, said this week in a video interview on the Utah-based faith’s newsroom website.

That two-year surge then will start to slip — as expected.

Evans estimates the missionary tally to settle in at 77,000 to 79,000, down from its peak but still up 20,000 or so from October 2012, when LDS Church President Thomas S. Monson made the historic announcement lowering the minimum service age to 18 for young men (down from 19) and to 19 for young women (down from 21).