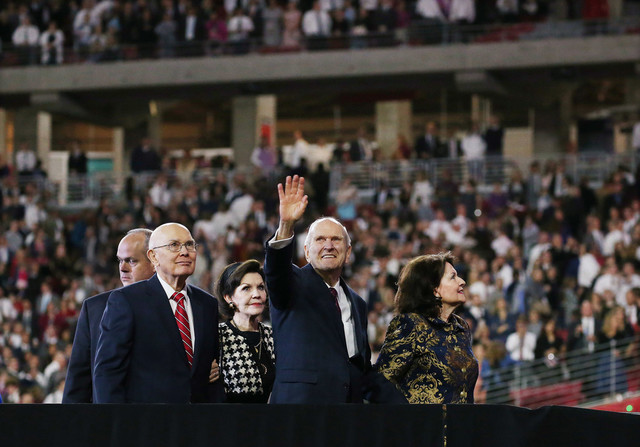 Arizona Governor Praises President Nelson and the Church: He Is "a Man of Peace"

"To be faithful to our temple covenants means we are willing to be different — much different — from men and women of the world," President Nelson said during a devotional at an NFL stadium in Arizona while speaking to 65,000 Latter-day Saints. "As covenant keepers, our thoughts, behavior, language, entertainment, fashion, grooming and time on the internet — to name a few things — are to be distinct from patterns and habits considered as normal by the world."

Arizona Governor Doug Ducey has noticed that difference among the Latter-day Saints in his state and our prophet, President Russell M. Nelson. Tad Walch from the Deseret News recently covered President Nelson's devotional address and highlighted what other government and religious leaders had to say about hearing a prophet of God speak:

"Several state leaders commended President Nelson for the viewpoint column he wrote that was published Sunday in the Arizona Republic and thanked him for Latter-day Saint contributions in Arizona and around the world.

"Gov. Ducey pointed out that the Latter-day Saint presence in Arizona predates statehood by 65 years, with the Mormon Battalion's march in the winter of 1846-47. He expressed gratitude for President Nelson's visit to the state.

"'He certainly strikes me as a man of peace and you can just see it in his presence and the strength of his words,' the governor said. 'The sheer number of people of the faith that are in leadership positions in the state — local, city, county, municipal and federal — has changed Arizona for the better. The strength and energy of the young missionaries when they tackle a problem or an issue has been positive for the state of Arizona.'

"Bishop Olmstead, leader of the Catholic Diocese of Phoenix, thanked President Nelson for the collaboration of the two churches around the world on a large number of projects.

"'I'm so grateful for those opportunities,' he said, 'especially addressing issues like the dignity of every human person and religious liberty, which are really important questions in society today.'"

Arizona State University President Michael Crow added, "It's tremendously important to be able to meet with the president of the faith and hear his words of wisdom and his insights and his perspective, at the moment of his life, age 94, where he's at the peak of his wisdom."