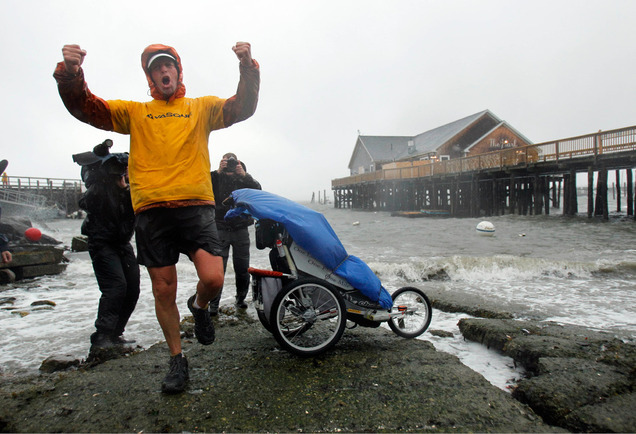 An Army veteran who pounded the pavement from coast to coast to honor the nation’s fallen troops finished his grueling journey in rain and high winds on Friday in Maine.

Mike Ehredt of Hope, Idaho, placed a flag in the ground every mile along the way to honor military personnel killed in Iraq and on Friday the final flag honored Marine Maj. Jay Aubin, a pilot from Waterville who died when his CH-46E Sea Knight helicopter went down near the Iraq border.

The 49-year-old extreme runner kicked off his journey on May 1 in Astoria, Ore., averaged about 29 miles a day and took only four days off. All told, he ran 4,425 miles.

Howling winds and sheets of rain accompanied his finish on the Rockland waterfront, where supporters gathered wearing bright yellow T-shirts emblazoned with “Thanks Mike!”