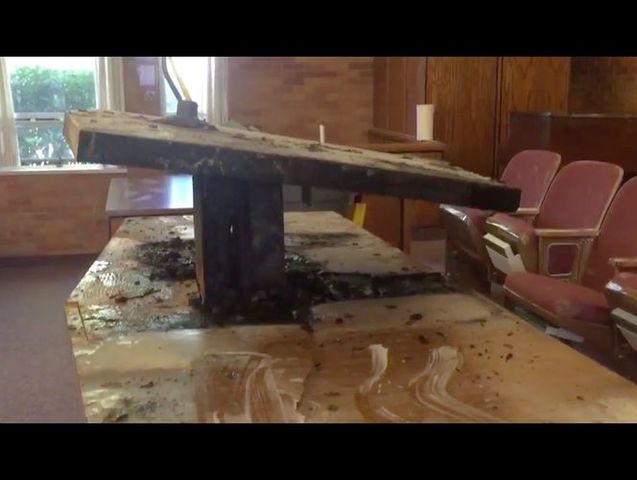 Members Save LDS Chapel Set on Fire by Arsonists

Early Friday morning, several church members were playing basketball at their local ward house in Vancouver, Washington, when they began smelling smoke. It was just before 7 a.m.

The men quickly began searching the church house and found a fire blazing in the chapel. "The pulpit, where the speakers stand to speak on Sunday, was fully enflamed,” Ron Kramer, one of the basketball players, told KGW News. Along with the pulpit, the players found some of the chapel's hymnals in flames along with a message, which appeared to be written in shaving cream. The message read "Ha, Ha."

"This is a house of God. This is a sacred place for us. It’s just sad,” told Kramer KGW News.

Our first look inside the church in Vancouver where someone set the pulpit on fire @KGWNewspic.twitter.com/Bel7jiZsI3— Rachael Rafanelli (@RachaelKGW) April 8, 2016

Moving quickly, the men grabbed fire extinguishers to suppress the flames before throwing the hymnals in a garbage can, which they rolled outside.

When fire and police officials arrived, they found one of the windows in the church had been broken.

This arson comes shortly after two teens were arrested for vandalizing a church in Hillsboro, not far from Vancouver.

“I want to say: I hope you get some help,” said Ivan Jensen, another of the players, about the arsonists. “We’d be willing to help you, if you want us to.”