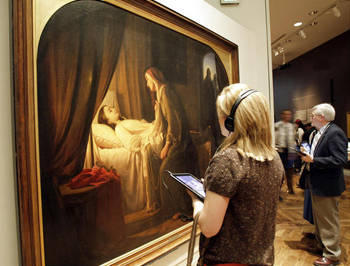 ne day, while Jesus was speaking on the west side of the Sea of Galilee, a desperate man approached him through the crowd. Jairus was a lay leader of the synagogue, probably in Capernaum. His only daughter, just 12 years old, was at the point of death. But, he implored, falling down at the Savior's feet, if Jesus would only come and lay his hand upon her, he knew that she would live. So Jesus, who (as Jewish custom prescribed) had been sitting while teaching, stood up and, with his disciples, followed the worried father.

But so did the crowd. And they, too, were needy. It was a slow procession, and before they had gone very far, others from Jairus' house met them. His daughter, they told him, was dead. There was no point in troubling "the Master" any further.

"Be not afraid," Jesus responded, in his first recorded words to Jairus, "only believe." "She shall be made whole."