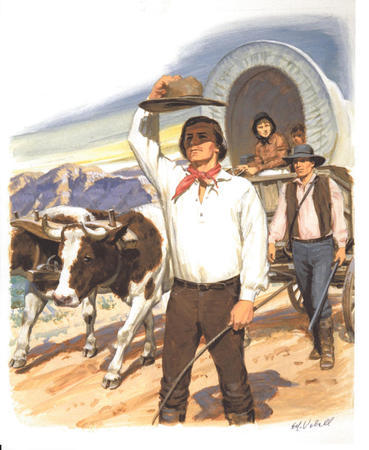 Artist recalls his work for Mormon Pavilion at 1964 World's Fair

On a cold, gray day in early 1962, 41-year-old artist Ed Vebell put down his paintbrush and stepped back from the easel in his seaside studio in Westport, Conn.

His half-finished illustration for the upcoming issue of Reader's Digest would have to wait. Vebell had been summoned to a meeting with two representatives from the LDS Church.

With the New York World's Fair due to open in 1964, the church was actively courting top artists to produce paintings, murals and sculptures for its Mormon Pavilion exhibit. Westport was the go-to place. Home to the Famous Artists School, the town attracted some of the best commercial artists in America. Vebell's friends — artists Harry Anderson and Alex Ross — lived nearby and were also being pursued to work on the Mormon Pavilion project.

Wearing blue jeans, a baseball cap and a sports jacket over a sweater, the athletically built Vebell went to the appointed meeting place: the corner of Old Post Road and Main Street in the center of town.