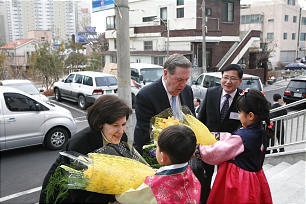 Asia North Area apostle visit: 'This is a historic meeting'

Elder Jeffrey R. Holland and Elder Quentin L. Cook of the Quorum of the Twelve and Elder Ronald A. Rasband of the Presidency of the Seventy spent 12 days traveling in the Asia North Area during February. Stops on their itinerary included the Korean cities of Seoul, Busan and Daejeon, and the Japanese cities of Tokyo, Osaka and Nagoya. Elder Cook visited Hanoi, Vietnam, as well.

There is a deep sense of the history of the Church in the Asia North Area, Elder Holland said.

"It began with Elder Heber J. Grant who landed in Japan in 1901 to dedicate the land. It continued when Dr. Kim Ho Jik was baptized in 1951 as the first Korean member," said Elder Holland. "The Church and the work here are firmly established. We saw faithful and diligent members of the Church everywhere we went."