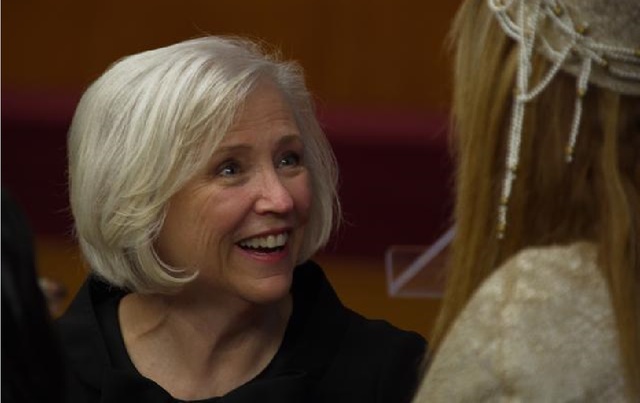 Two days before participating in the women's session of general conference, Sister Neill F. Marriott, second counselor in the general presidency of the Young Women, inspired women from around the world of all faiths as she spoke on a panel at the United Nations 60th Commission on the Status of Women.

During her panel, entitled, “Fostering World Leadership in Young Women Starting with the Role of the Mother,” Sister Marriott shared how the Church's Young Women program helps young girls gain confidence, value, and self-worth, allowing them to lead future generations by standing firm in their beliefs.

It is through their example and the role that they will play as mothers that many women stand as strong leaders and influencers today. Sister Marriott's panel "showed how different sectors of society can support the role of mothers and help young girls achieve their full potential," according to the Mormon Newsroom.

Sister Marriott also shared how strong families are the foundation that undergird stronger communities and nations, leading to a stronger world. Other panelists presenting with Sister Marriott focused on focused on humanitarian aid, community activism, and the daughter’s perspective.

During the women's session of general conference on Saturday, Sister Marriott continued to inspire and empower women around the world, sharing how when we submit our will to our Heavenly Father, we receive a power and strength beyond our own.

"When we open ourselves to the Spirit, we learn God’s way and feel His will. During the sacrament, which I call the heart of the Sabbath, I have found that after I pray for forgiveness of sins, it is instructive for me to ask Heavenly Father, “Father, is there more?” When we are yielded and still, our minds can be directed to something more we may need to change—something that is limiting our capacity to receive spiritual guidance or even healing and help."

It is only by taking our broken hearts and weaknesses to Christ that we can be built into strong women and leaders, both in the Church and in the world.