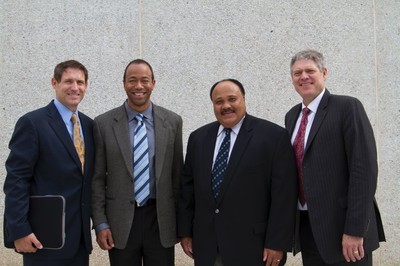 Following a VIP reception and dinner held on the grounds of the Atlanta Georgia Temple on Friday, April 8, Georgia Governor Nathan Deal and Georgia First Lady Sandra Deal toured the temple with Elder William R. Walker of the Seventy.

The evening was hosted by Elder M. Keith Giddens, temple rededication chair and an Area Seventy. Local resident Elder J. Devn Cornish, recently called to the Second Quorum of The Seventy, offered the invocation. Following the meal, attendees were treated to an a cappella musical number by the Krogh Family Singers, How Great Thou Art, and then to remarks by Elder Walker. The attendees were shown a short video on temples featuring pictures of early Atlanta congregations. Elder Walker, Elder Giddens, and Clark Hirschi (area relations manager for Church Public Affairs), led the tours of the temple.