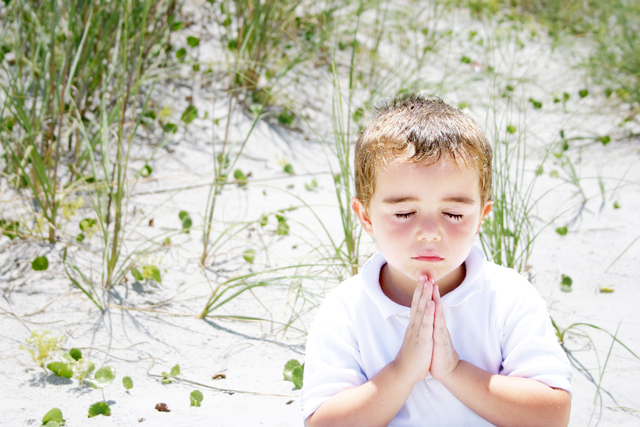 Make a copy of the scriptures below. Gather five pictures: The Tower of Babel (or the Brother of Jared); Alma the Younger; Nephi and His Broken Bow; Alma and Amulek in Prison; Jesus Blessing the Children in the Americas.

Tell the children they are going to help each other learn about people in the scriptures whose prayers were answered. Divide the children into groups. Make sure a teacher or other leader is in each group. Give the groups a picture and the accompanying scripture. Give them a few minutes to read the story and decide how they will retell it to the other children (encourage them to tell it in their own words rather than reading it).

Let each group show their picture and present their story.

And the brother of Jared being a large and mighty man, and a man highly favored of the Lord, Jared, his brother, said unto him: Cry unto the Lord, that he will not confound us that we may not understand our words.

And it came to pass that the brother of Jared did cry unto the Lord, and the Lord had compassion upon Jared; therefore he did not confound the language of Jared; and Jared and his brother were not confounded.

Then Jared said unto his brother: Cry again unto the Lord, and it may be that he will turn away his anger from them who are our friends, that he confound not their language.

And it came to pass that the brother of Jared did cry unto the Lord, and the Lord had compassion upon their friends and their families also, that they were not confounded.

Now the sons of Mosiah were numbered among the unbelievers; and also one of the sons of Alma was numbered among them, he being called Alma, after his father; nevertheless, he became a very wicked and an idolatrous man. And he was a man of many words, and did speak much flattery to the people; therefore he led many of the people to do after the manner of his iniquities.

And as I said unto you, as they were going about rebelling against God, behold, the angel of the Lord appeared unto them; and he descended as it were in a cloud; and he spake as it were with a voice of thunder, which caused the earth to shake upon which they stood; . . . saying: Alma, arise and stand forth, for why persecutest thou the church of God? For the Lord hath said: This is my church, and I will establish it; and nothing shall overthrow it, save it is the transgression of my people.

And it came to pass that I, Nephi, did make out of wood a bow, and out of a straight stick, an arrow; wherefore, I did arm myself with a bow and an arrow, with a sling and with stones. And I said unto my father: Whither shall I go to obtain food?

And it came to pass that the voice of the Lord said unto him: Look upon the ball, and behold the things which are written.

And it came to pass that I, Nephi, did go forth up into the top of the mountain, according to the directions which were given upon the ball.

And it came to pass that I did slay wild beasts, insomuch that I did obtain food for our families.

And it came to pass that Alma and Amulek answered him [the judge] nothing; and he smote them again, and delivered them to the officers to be cast into prison.

And it came to pass after they had thus suffered for many days, . . . that the chief judge over the land of Ammonihah and many of their teachers and their lawyers went in unto the prison where Alma and Amulek were bound with cords.

And Alma cried [prayed], saying: How long shall we suffer these great afflictions, O Lord? O Lord, give us strength according to our faith which is in Christ, even unto deliverance. And they broke the cords with which they were bound; and when the people saw this, they began to flee, for the fear of destruction had come upon them.

And it came to pass that he commanded that their little children should be brought.

So they brought their little children and set them down upon the ground round about him, and Jesus stood in the midst; and the multitude gave way till they had all been brought unto him.

And when he had said these words, he himself also knelt upon the earth; and behold he prayed unto the Father, and the things which he prayed cannot be written, and the multitude did bear record who heard him.

And it came to pass that when Jesus had made an end of praying unto the Father, he arose; but so great was the joy of the multitude that they were overcome.