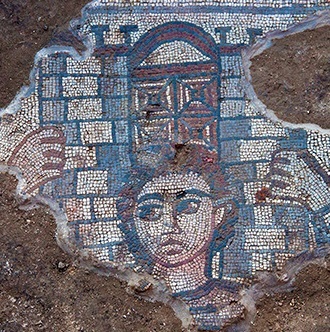 In May and June, 2013, Brigham Young University professor Matthew Grey supervised the excavation of an ancient synagogue in which a stunning pair of mosaics were discovered. The floor mosaics decorated the eastern aisle of the Late Roman (fifth century) synagogue at Huqoq in Israel’s Lower Galilee. One of the mosaics found shows Samson carrying the gate of Gaza on his shoulders (Judges 16:3). Adjacent to Samson are riders with horses, apparently representing Philistines.

The director of the Huqoq excavations, Jodi Magness, explains, “This mosaic differs in style, quality, and content from the Samson scenes."

Read the rest of this story at religion.BYU.edu