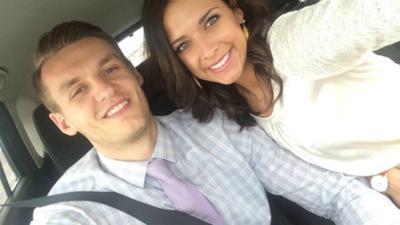 They're among the greatest BYU athletes of all time in their respective sports, but Kyle and Shea Collinsworth are more concerned with their life away from the game.

Kyle, a record-holding basketball star, and Shea, an All-American track athlete, first became acquainted in the BYU weight room. Kyle, wearing a cutoff hoodie and snow boots, called Shea over to rate his outfit on a scale of 1-10. She gave him a three.

She told the Deseret News, "I turned around and walked away, thinking, ‘I’m the biggest brat. Why did I say that?'”

But Kyle was persistent. A couple of well-placed comments on Shea's Instagram account were enough to score him a date. Then another. And another.

It was a courtship filled with typical fiascos. Shea opened the sunroof on a wintry day, filling the inside of Kyle's car with snow. Kyle took Shea golfing, told her the key was to keep her eye on the ball, then missed the ball entirely while demonstrating. But finally, despite their unbelievably hectic schedules, Kyle and Shea found the time to get married last summer.

With Kyle, who recently finished his senior season, aiming for a shot in the NBA, things haven't gotten any easier. "He's been gone for . . . almost two months . . . training," Shea told Fox 13 recently. "but I feel like we make it work."

Right now, Shea's attention is focused on becoming a national champion in her best event, the 800-meter run. A highly-sought recruit out of Davis High School (Kaysville, UT), Shea immediately made an impact at BYU. She earned All-American honors this year and will seek the national title next week in Eugene, Oregon.

Kyle has been tirelessly working out for NBA teams since the completion of his BYU basketball career. After an LDS mission to Russia, he enjoyed one of the most successful careers in team history, finishing as BYU's all-time leader in rebounds and assists. He also set an NCAA record with 12 triple-doubles over the course of his career, beating the old mark set by legendary center Shaquille O'Neal.

When they met, Kyle was a kid working out in snow boots, and Shea didn't even know what a triple-double was. Though they're still uncertain what the future holds, thanks to a weight room pick-up line, they'll always have each other. "We [are] willing to make sacrifices," Shea said, "and make our time together count."