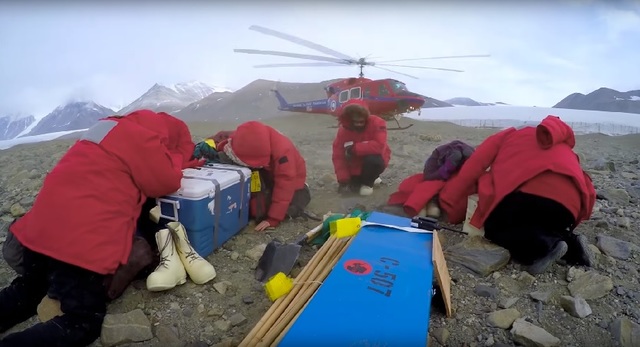 Brigham Young University biology professor Byron Adams has spent many months in the depths of Antartica, conducting scientific research in the coldest, harshest environment on earth.

In a journey that takes more than 36 hours, Adams makes his way to the research fields of Antartica by plane and helicopter to study microscopic life that survived the ice age.

After a 20-hour flight to Christchurch, New Zealand, Adams takes a number of smaller flights into the heart of Antarctica to study microscopic creatures like tardigrades, nematodes, and rotifers.

Fascinated by these microscopic worms that managed to survive the ice age in such a harsh environment, he hasn't come to any conclusion about how the organisms survived.

"Maybe they just survived frozen for 20,000 years—went into cryptobiosis and shut down until the Pleistocene [ice age] was over," Adams told BYU News. "It's still a mystery how life survived here. They did, but it's still unsolved."

► You'll also like: Elder Oaks Shares How He Reconciled Science and Religion

Adams hypothesized that the organisms survived at higher elevations, then moved down as the glaciers receded. However, when he studied the soil at a higher elevation, he found toxic levels of nitrogen, making it unsuitable for life.

"These habitats have basically sucked for like five million years," Adams says. "If you were a little nematode worm, you wouldn't survive on Brown's Butte on the Beardmore region. You're just not going to make it in those conditions."

Even for the researchers, the conditions in Antarctica are challenging. Not only do the researchers have to find a way into the depths of Antartica by plane, but they have strict rules about how often they visit their sample sites and the modes of transportation they use.

"You walk some place and your footsteps will be there for 100 years. It’s the most pristine environment on the planet and all the damage that’s done is done by scientists," Adams says. "So we have to be very careful."

However, Adams hopes the research will pave the way for other important discoveries.

"The fundamental discoveries that we make about how life exists in this environment are going to be able to tell us really important things in these other environments and other animal systems—other ecological systems," he says.

Adams plans to return to Antartica during the summer months, which occur from December to February for the continent, to continue searching for answers and breakthroughs.

Mormon Life Byu ScienceByu,Science,Mormon Life
Comments and feedback can be sent to feedback@ldsliving.com