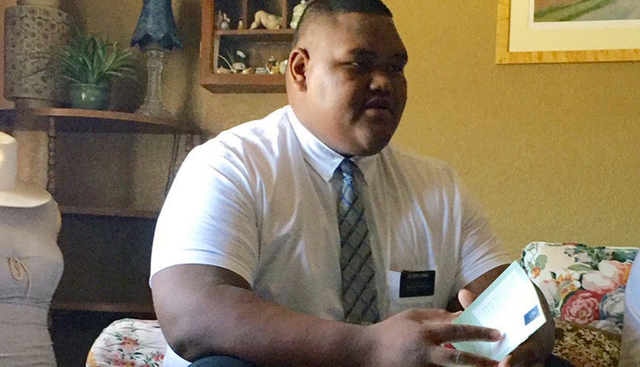 No matter where he goes, at 6'7" and 425 pounds, Motekiai Langi isn't likely to go unnoticed. The future BYU football player and current LDS missionary in Arizona was recently highlighted in an in-depth article on Campus Rush, an entity of Sports Illustrated.

"Langi is dressed in the uniform of a Mormon missionary: white collared shirt, blue plaid tie, black pants and a nametag identifying him as "Elder Langi," which he goes by on these long days of proselytizing," reads the article. "He seems too big for the world around him; his 22-inch neck strains against his collar, his feet threaten to pop the seams of his size-15 loafers, and his hand makes the 766-calorie Prime Rib Dip it holds look like doll food."

Langi had never played football before he was signed and offered a scholarship by the Cougars, who were the toast of signing day when they nailed a commitment from the man who's soon to be the largest player in college football. BYU Athletics tweeted a picture of Langi next to Cougar Bronson Kaufusi, himself a giant of a man yet looking rather small next to the imposing Langi.

The article then goes on to describe the effect that LDS missions have on college athletes and BYU football players in particular.

In 2015, 147 returned Mormon missionaries competed on FBS football rosters, 74 at BYU, according to data compiled by the Deseret News. Missions, in which young Mormon adults are dispatched to far-flung locations to teach about their faith and do service work, have long been a tradition in the Church of Jesus Christ of Latter-day Saints. It's common for young Mormons to delay their careers or educations (the trips last two years for men, 18 months for women), but viewed through the lens of sports, that gap can be controversial. Outsiders argue they give BYU and other schools with missionary populations (such as Utah and Utah State) an unfair advantage: more mature players, both physically and mentally. Among most in BYU's athletics department, though, the practice has different implications.

"Nothing disrupts training like your mission," says Kalani Sitake, the Cougars' first-year coach, who completed a mission during his college career. "I've heard people say it's a huge advantage. It's not. If it was, everybody would be doing it."

Like Sitake and Mendenhall before him, a large number of BYU's coaches are members of the LDS faith, and the program's attitude about missions is the antithesis of the prevailing wisdom in football. Instead of telling players to exist as slaves to the game, coaches encourage them to step away—with a gentle reminder to stay in shape as best they can.

Missions are, most around the program say, a disadvantage for a team that's finished with a winning record in every season since 2005. While on their two-year assignments, players have little control over nutrition—their food budget is less than $200 per month—and exercise regimens. Not all missionaries have access to gyms, and each must spend all his time with an assigned companion, many of whom have little interest in working out, much less keeping up with a high-level athlete at 6 a.m. According to Brett Mortensen, BYU's rehab coordinator, players return from missions either too thin or too fat, and it takes most close to a year to regain playing shape. Managing rosters and negotiating who will redshirt and who can play right away, factors that depend as much on a player's physical shape as they do on church-mandated return dates, is an extra burden for coaches, but anyone at BYU will tell you (and tell you earnestly) that the program wouldn't have it any other way.