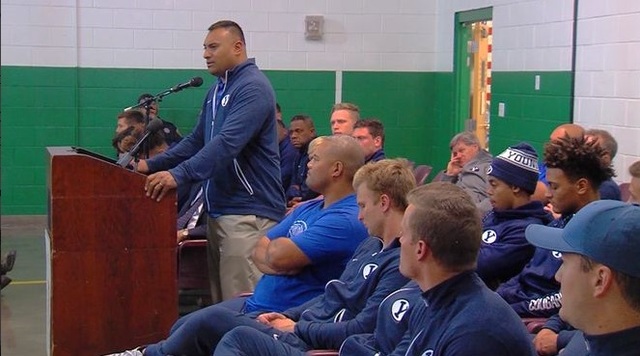 It was after midnight and the scoreboard read 28-27. After a blocked field goal and failed Hail Mary resulted in another loss for the Cougars, it could have been easy for them to put their heads down and trudge into the locker room.

In fact, some players had already started exiting the field, but they returned moments later and the whole team thanked their fans and sang the BYU fight song.

The next day, the Cougars continued to focus on principles more important than winning when they held their annual fireside at the Utah State Prison.

“Even after losing a close game, it was important for these young men to be here,” Sitake said. “I hope they can feel the love and appreciate that we have.”

Sitake, who continued the tradition of former coach Bronco Mendenhall, spoke about the adversity of losing close games like Thursday, or the one-point loss at Utah in the second game of the season.

“I’m in the position now of a head coach of great young men that love life and love to serve others,” Sitake told the crowd. “I’m honored to be their head coach, and to be their friend.

“I can honestly say that they make me a better person.”