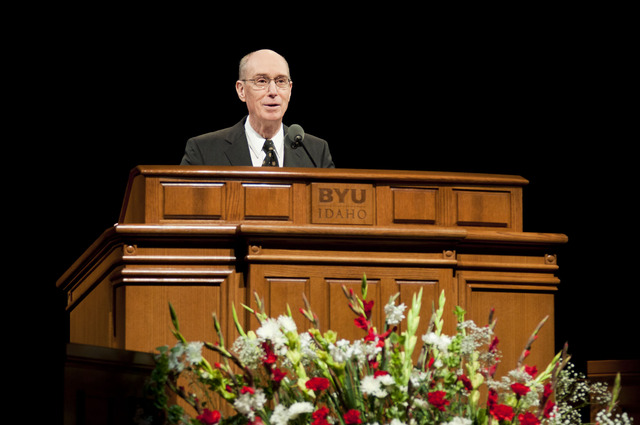 An hour from now I will be part of the first class to graduate in the newly dedicated BYU-Idaho Center. By the time you read this, it will already be past, and both I and Brigham Young University-Idaho will have grown up and graduated.

Both? Yes. During my entire educational experience at BYU-Idaho, the campus was under construction. Blocked-off pathways, gutted parts of buildings, holes in the ground and large moving machinery made walks to class that should have taken five minutes last fifteen. The Hyrum Manwaring Student Center underwent three phases of renovation, so that the only part of the entire building recognizable from its old self is the bowling alley. I watched the BYU-Idaho Center drop from just ground to a very deep hole in the ground (70,000 cubic yards of lava rock were hauled out to build it) and then rise to a towering edifice containing 14 million pounds of steel; 7,000 light fixtures; 212 toilets; and enough concrete to build a 6’-wide sidewalk to Pocatello, 70 miles away.

And I was under construction as well, building new frameworks of understanding and fleshing them out with knowledge and experience as I worked toward obtaining my degree.

Now we have both reached the completion phase. At a press conference on Dec. 16, the day before the dedication, Kim B. Clark, president of the university, explained that “These two projects—the BYU-Idaho Center and the Manwaring Center—are the capstone projects of the foundation of BYU-Idaho. In a very real and dramatic sense, they mark the completion of the creation of the university [from Rick’s College].”

My roundabout path I took to graduation, switching majors multiple times and even universities once, was also emulated by BYU-Idaho’s campus. The BYU-Idaho Center took longer and more money than expected to build. The size and scope of the plans changed repeatedly before being implemented. After the broad idea was finally approved, the building was constructed while simultaneously being designed—an impressive feat for such a complicated structure.

“We started the foundation before the building was designed,” President Clark explained, “and we went layer by layer, where the engineers and the architects and the contractors were working in sync, getting enough to keep going but just designing the building as we were building it.” Even the name—BYU-Idaho Center—is unconventional when contrasted with every other building on both BYU's and BYU-Idaho’s campuses, all of which are named after a person.

But the attention to detail in the finishing touches was not forgotten: in the final days before it opened to the public, the architects placed blue and green numbered tags throughout the building, corresponding to a spreadsheet list of minute tasks that needed to be completed. The list had over 3,300 items on it, sometimes with jobs as small as fixing a nail, so that when it was finally finished, the building would be totally perfect.

Innovation and frugality also had their place—there are reflective panels on the higher ceilings to mirror the light from fixtures placed at a more accessible, lower location. Since the Church owns the copyrights to the beautiful paintings displayed throughout the building, they were able to take photographs of the images rather than buy reproductions, but the quality is just as breathtaking.

In his talk the following day at the dedication, President Clark explained that despite the many awe-inspiring aspects of the new BYU-Idaho Center (that looks almost identical to the Conference Center in Salt Lake City but seats 15,000 instead of 21,000), “The wonder is not in the building, as impressive as it is. The wonder we feel is in the work that the Lord will do here, . . . the powerful influence the Lord will have on the hundreds of thousands of young people who will gather here and whose lives will be changed forever by what they experience here. We sense the impact these wonderful young people will have in their families, their communities, and the kingdom of God.”

As I go forward with my life after graduation, I have to remind myself that the wonder is not in my degree but in what I do with that degree. What matters is how I will impact the world and those around me with the things I have learned at BYU-Idaho—both the lessons learned in classrooms and last-minute cram sessions and those learned from the late-night dance parties with roommates and tear-ridden tubs of Ben & Jerry’s.

All four of the speakers at the dedication—President Clark, Elder David A. Bednar (a former president of BYU-Idaho), Elder Russell M. Nelson and President Henry B. Eyring (a former president of Rick’s College)—expressed their profound gratitude for the devotion, sacrifices, faith and miracles that have been seen in the construction of these buildings and the expansion of this university. They emphasized the need for all of us to be grateful, with Elder Nelson citing Doctrine & Covenants section 98: “In everything give thanks.”

And I am grateful. I’m grateful to the professor who brought a video camera to his excessively large class of 52 students so that each one could say his or her name and hometown on it and he could take it home to practice. And I’m even more grateful that one week later, as I crossed campus absorbed in my texting world, I was interrupted by exuberant shouts of “Kaela! Kaela!” and looked up to see him waving both arms in the air. I’m thankful to the sweet professor who drew a diagram on the board explaining that we were not our grades, and that he loved us no matter what grade we received on our papers he was about to hand back. I’m grateful to the professor who taught me everything I needed for my future career amid zany exhortations to “Fly, my monkeys, fly!” I’m grateful to caring bishops, to crazy and fun roommates, to the random people that give out free hugs as you’re walking through the Manwaring Center. I’m thankful for all the people that make this university the special and unique place that it is.

President Eyring taught in his dedication speech that “This institution’s success depends on the desires of its individual members. We must come to want what the Lord wants. We must come to want His approval more than that of the world. That is not easy . . . Making the changes the Lord wants will take uncommon courage and more than human wisdom.”

In order to achieve this, we can follow Elder Nelson’s advice to, upon the dedication of these buildings, “Take this opportunity to rededicate yourselves.” I promise, Elder Nelson and President Eyring, to do that. I promise to carry forward the legacy that BYU-Idaho has so generously shared with me into the rest of the world. And I challenge all of you who are reading this to do the same.