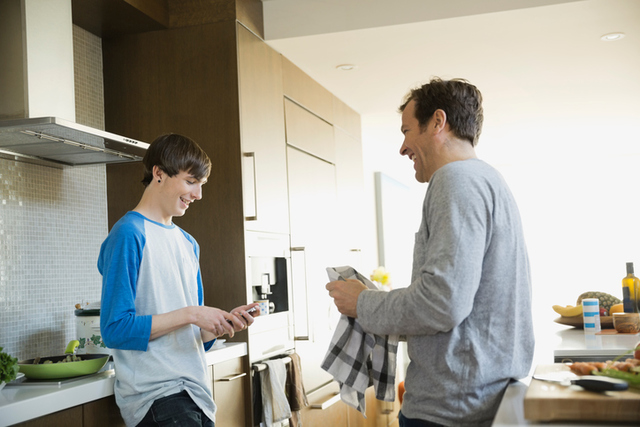 There are so many dangers and pitfalls in the world, it often seems as though parenting is making sure our children don't do certain things. Don't touch that hot stove. Don't run into the street. Don't take drugs.

As valuable as such restrictions can be, a mastery of them does not equal balanced children or parenting. This was the subject of research done by Laura Padilla-Walker, Associate Professor at BYU and Associate Director of the university's School of Family Life. In a recent research brief, Padilla-Walker concluded that in order for a child to flourish during his or her adolescence, simply "not being bad" isn't good enough.

"If we ignore the good, we tell children what they shouldn’t do, but don’t replace it with what they should do," Padilla-Walker said. "We focus so much on eliminating bad behavior, but it is important to know that you can discourage bad behavior by encouraging good behavior."

Using data from BYU's extensive, 10-year Flourishing Families Project, Padilla-Walker and her colleagues concluded that in order for a young person to flourish in life, they need to develop four important traits.

"Because the teen and young adult years are a pivotal and dynamic time in a person’s life, where many decisions that have lifelong consequences are made, it is especially important to consider self-control during these years," Padilla-Walker writes. "If a teenager has challenges controlling herself, she will find it quite difficult to engage in positive behaviors and avoid negative behaviors."

Self-control is largely regulated by the frontal lobe of the brain, which doesn't finish developing until the early- to mid-20s. This means that it's normal, perhaps even healthy, for a teenager to slam a door once in a while.

However, good habits and practices can be developed early in life, and adolescents who are largely unversed in self-control won't have adequate protection against problem behaviors such as stealing, truancy, and drug use. Research has shown that teenagers with low self-control tend to be more depressed, while teenagers with high self-control have higher relationship quality, healthier diets, more self-esteem, and achieve more academically.

It's not always easy, but parents can do much to help their children develop self-control. Perhaps the most important thing is to be a good model of self-control themselves. "If parents yell and slam doors and lose their temper often, children will model that behavior," Padilla-Walker writes. She adds that no parent is perfect, but that apologizing and remedying in times of failure can effectively model healthy behavior. If a child loses control, parents can also help children to think of more appropriate ways to respond to stressful situations.

Adolescence can be so tumultuous, it often seems that a "self-confident teenager" is an oxymoron. However, that doesn't need to be the case. Padilla-Walker concluded that an astonishing 60% of teenagers actually have high self-esteem. "A child or teenager who feels confident about who he or she is will not be as worried about what others think," she said. She added that when a child is more self-assured, he or she will be able to devote more time and energy to helping others and other productive behaviors.

Perhaps the most important thing a parent can do to help a child develop self-esteem is to allow autonomy: the ability for someone to make decisions for themselves. If a child feels overly pressured into attending a certain college or having certain religious beliefs or any number of other decisions, the child won't feel confident in their ability to make good choices or be in charge of their own lives.

Parents should avoid being overly critical of their children, but also avoid excessive praise, which can actually backfire by seeming insincere. Allowing children a sense of control and independence will help them reflect more on how to replicate their good decisions and remedy their bad ones.

When we speak of a person with "values," we're often speaking in wholly positive terms. However, it's important to realize that everyone has values—people just don't always value the right things. For instance, some people value money. Others, power. Still others value pleasure above all things, living a hedonistic lifestyle that ultimately benefits nobody—including themselves.

It's important for parents to teach their children good values, especially in their teenage years. It's true that most teenagers don't strongly value power yet, but most are naturally materialistic and/or hedonistic. It's important for parents to help children control and moderate those values, while also developing more positive, productive ones like benevolence (being kind and helping others) and achievement.

Values should never be forced onto a child. However, correct values (and by extension, correct behaviors) can be best taught by example. If you strongly value honesty, and you want your children to strongly value honesty as well, don't lie to them. Consistency is also important. If parents only emphasize education some of the time, or if mom does but not dad, children are likely to be unclear on how much they should value their education.

Where would any of us be without empathy? Think about it—what would your life be like right now if, from the moment of your birth, nobody cared about you or was driven to help you in any way? It's safe to say that our society would cease to function without empathy, and it's very important that your children be endowed with this trait.

It's interesting to note that while boys typically score lower than girls when testing empathy, this is not true when the test is biological (heart rate, brain scan, etc). This suggests that boys are either outright ashamed of being empathetic or trained by society to tone down their empathetic responses—and parents can help to combat this. How? By encouraging pro-social behaviors—helping, sharing, volunteering.

"Prosocial behavior is one of the key behaviors that can replace bad behaviors and also promote good behaviors, especially empathy," Padilla-Walker writes. "In turn, empathy is one of the strongest predictors of prosocial behavior, so these are two aspects of caring that are really important for children." Parents should model empathy for their children, encourage them to see things from the viewpoint of others, and provide many experiences for them to serve others and build their empathy.