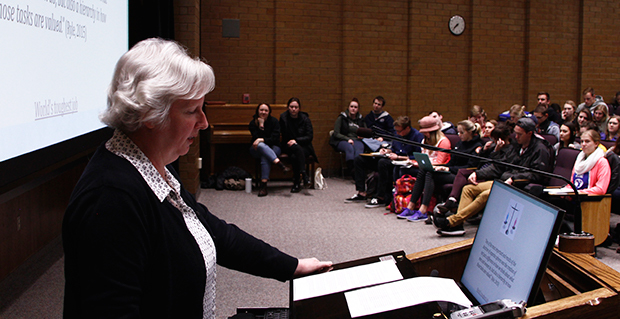 Even though more women are working outside the home than ever before in history, women continue to do the majority of household work, said a Brigham Young University professor addressing the topic “Women’s Work? The Gendered Division of Housework.”

Addressing a packed assembly hall in the Spencer W. Kimball Tower on February 23, Sister Forste discussed how the gender gap in the division of labor in the home has evolved over the decades.

“I believe the underlying problem is that as a society, we do not value housework, certainly not as highly as we value paid labor,” Sister Forste said. “If we truly valued housework and homemaking, we would be willing to do it.”

The share of “traditional” breadwinner-homemaker households fell by nearly half from 46 percent in 1970 to 26 percent by 2015, according to data from the Pew Research Center. Sister Forste also noted that two-parent households with both parents working full-time increased from 31 percent to 46 percent during the same time period.

“This is a major shift in family life over the past five decades,” she said.