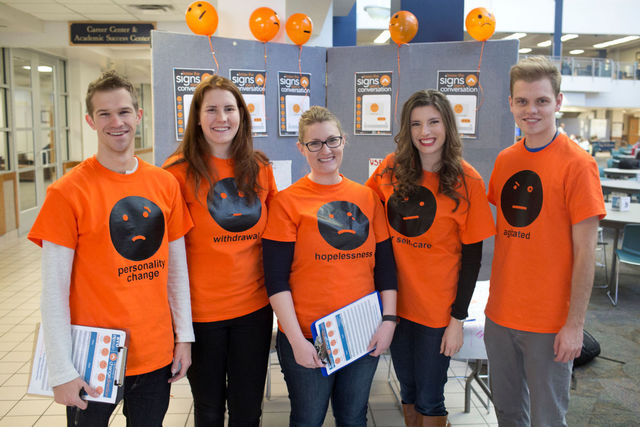 How BYU Students Are Changing How We See Mental Illness

Students at Brigham Young University are starting the conversation about mental health in a way that can help Mormons feel more comfortable in approaching the topic.

Five public relations seniors participating in the annual PRSSA (Public Relations Student Society of America) Bateman Case Study Competition have developed a plan for their fellow students and Americans to approach the issue. The project has been developed for their client, Campaign to Change Direction—a national effort “to change the culture of mental health in America.”

“Opening up the conversation about mental health in any setting, not just BYU, will increase empathy and reduce the shame that we sometimes associate with mental health,” says Ashley Frost, vice president of BYU PRSSA.

But mental health may be a struggle for LDS members in a different way, which makes it harder to understand and approach.

“From some of our interviews with students, we know how closely mental health is tied to religion and spirituality. There's a misconception sometimes that people wouldn't have mental health struggles if they were praying more, or 'chose' to be more optimistic, or followed the commandments better,” Frost says. “We don't only rely on prayer and priesthood blessings to fix physical health issues, so we want that same attitude to apply to mental health.”

According to research done by the BYU students in a convenience sample, they found the following information about their fellow students:

From the website for the Campaign to Change Direction, the five signs of someone who may be experiencing emotional pain are personality change, agitated, withdrawal, poor self-care, and hopelessness. The main goal of the national campaign is to encourage Americans to be aware of their own and others' emotional well-being and receive the support and care they need.

“We are opening up the conversation about mental health on campus so that when people are struggling, they feel comfortable enough to reach out and get the help they need. We're emphasizing that mental health is just as important as physical health—you don't have to have a diagnosed mental illness for this issue to matter,” Frost says. “By encouraging discussion of mental, we're removing the taboo and making this topic less awkward and uncomfortable to address in a more casual setting.”

Students at BYU have been supportive of the action that is being taken. As many students know others who personally struggle with depression, anxiety, and other mental health issues, they are excited that something is being done to raise awareness for the topic.

“Many want to know exactly how they can get involved, which we've answered by providing them with concrete ways to start the conversation on social media, in their wards, and with their friends,” Frost says.

Some of the ways they have provided for students to get involved in the conversation include events, FHE lesson plans, informational booths, class/student ward visits, and social media (@knowthesignsBYU on Facebook, Instagram, and Twitter).

Their campaign is a month-long campaign lasting until March 15, but they have been working with other organizations on campus to continue spreading their message after their campaign is done. Find out more about how BYU students are starting the conversation on their website, knowthesignsbyu.com.

Lead photo from The Daily Herald