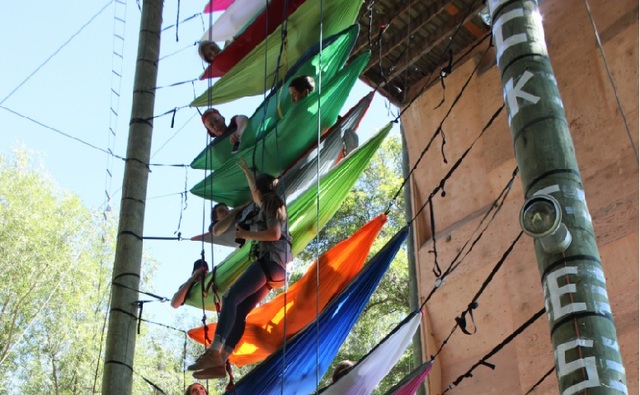 Instead of sleeping in tents and sleeping bags, hammock enthusiasts slept under the stars strung between trees at the Utah Summer Hammock Festival in Provo, Utah, on Friday, September 9.

With around 200 overnight attendees and more than 350 joining on Saturday morning, participants enjoyed food trucks, live music, and games. One of the main attractions of the event, however, was the attempt to create a record-breaking hammock tower, which ended up being 22 hammocks tall.

Hoping to make the Guinness World Records, festival participants set the North American record for the tallest tower of hammocks, which has yet to be submitted and approved.

Other recreational events attendees enjoyed at the festival included a zipline, canoes, and a spikeball tournament.

Hammock Tower Events and Weekend Voyagers teamed up to organize the event, and many companies used the festival to promote and sell their products.

One of the participants, Jelina Powell, told The Daily Universe, "I loved sleeping in hammocks under the stars. I overcame fears. I was terrified of heights and falling, but I got into the first hammock tower."

Many college-aged residents of the Provo area enjoy hammocking, which led to the overwhelming success of the event. BYU student Adriel Johnson told The Daily Universe, "It's kind of the thing to do. Hammocks are a great way to relieve stress. You can read a book or hang out with friends."

Because of the positive response from companies, attendees, and event coordinators, Weekend Voyagers and Hammock Tower Events plan to collaborate again to bring the event to larger venues annually so even more participants can attend.

Read the original stories from The Daily Universe.