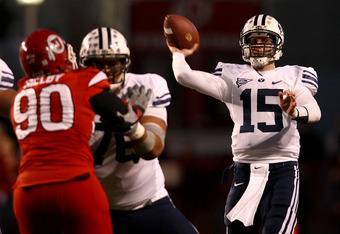 It's that time of year when the weather turns cold, when myopic BYU fans play the "what could have been" game and trash Utah fans for being white trash heathens, despite the fact that most Utah fans are members of the Mormon faith and as white collar as myself and John Huntsman.

It's also the time when the inferiority-complex burdened Utes fans spew their vitriol for the Cougars, despite not having any connection to the University of Utah aside from geography and a dislike of BYU.

But that's another article for another day. Today, we break down The Rivalry as it has played out in terms of the Mountain West Conference over the last six years—since Bronco Mendenhall and Kyle Whittingham tool over as coaches and TCU joined the league.

The numbers may surprise you.
Read the rest of this story at bleacherreport.com