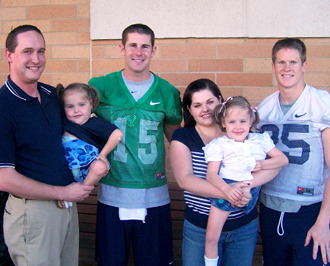 BYU athletes winning off the field

Last year I had the opportunity to interview BYU Athletic Director Tom Holmoe for an annual report that would be mailed to all Cougar Club members. Tom, as expected, talked about BYU's athletics successes. But he also shared a heartwarming story that made me realize that BYU's athletes are winning off the field as well.

"I'll tell you about Thursday's Heroes," Tom began. "We started this program years ago with Bronco. Early on a father brought a son who had had brain surgery. He had gone through radiation and chemotherapy. He came up here to my office. They had three or four other kids, and asked us, 'Hey, can we watch practice?'

"It was the day before a (football) game, and I said, 'You know what, let's go over to the stadium.' I didn't even know who the guy was.

"It was kind of casual. I called over to Bronco and said, 'Hey, Bronco, come meet these guys.' I told him their story and he said, 'Hey, come on down.'