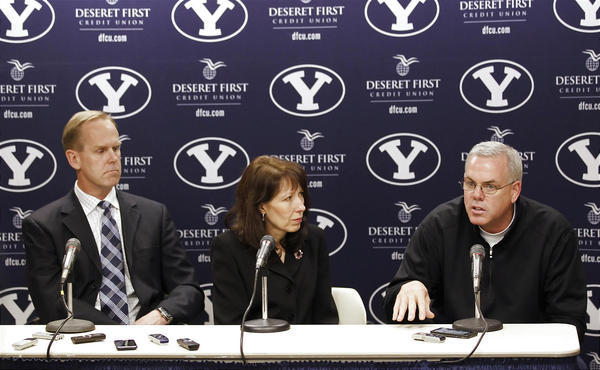 Jim Rome draws a seven-figure salary each year hosting national, sports-themed radio and television shows. His trademark shtick involves the unleashing of an acerbic, razor-sharp wit to induce laughter from his audience at the expense of prominent sports figures.

But Wednesday morning Rome's trademark sarcasm was noticeably absent, his voice instead characterized by a focused, clinical seriousness at the beginning of the syndicated radio show that reaches over 2 million listeners on more than 250 station affiliates. The first big topic of the day: BYU's suspension of sophomore center Brandon Davies for the rest of the basketball season due to a violation of the school's honor code.

"Credit to (BYU) for not compromising its integrity and selling out for the millions they could've made for a deep run in the NCAA tournament," Rome said. "How many programs would've let a player skate for violating a rule right before the (NCAA) tourney, especially if you're looking at your best season ever? … I respect it. I definitely respect that."

Rome isn't alone in praising BYU's decision to suspend Davies pending a complete investigation. Although many media members and bloggers expressed shock that the No. 3 college basketball team in the country could actually suspend its third-leading scorer and leading rebounder for the rest of the season over a non-criminal Honor Code violation, most coverage of the ordeal has not only been fair but even positive with regard to BYU's commitment to its values. Even if it has been positive, school officials would rather have foregone the attention for the sake of Davies, the team and its fans.