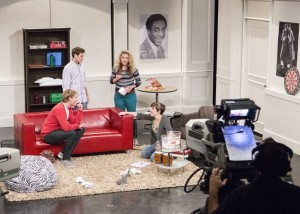 Fans of BYU’s Divine Comedy can now enjoy more laughs, jokes and spoofs from the comfort of their own couch as the stage production goes televised.

The televised version of the show, called “Studio C,” will premiere Oct. 6. Until then, anticipation and excitement grip the cast.

“I’m very excited for the show,”Adam Berg, a “Studio C” cast member from Highland said. ”It’s been a very long road to get the show to happen and I was just along for the ride for a lot of it, but it is very exciting,” Berg said.