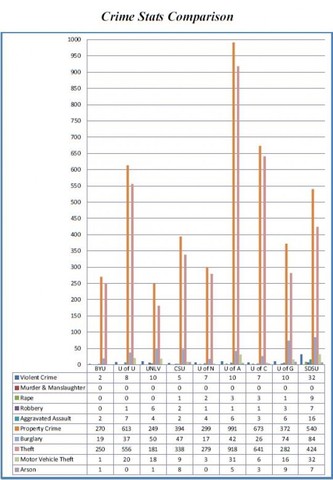 BYU’s crime rate sets it apart from other universities

“Aug. 28 — A suspicious person was reported to be lurking in the shadows at 67th and Wymount around midnight. It was a lost parent of a tenant.”

“Oct. 15 — A fight was reported at Wyview Park. The caller reported four loud voices near the volleyball courts. Officers arrived and found a group of students playing a game of acting out adverbs. The adverb the individuals heard being acted out was ‘aggressively.’”

“March 23 — A teaching assistant at the Talmage Building reported the Oreo cookies on her office desk were missing. She told the officer the door is always locked except for janitors. There were four cookies, worth 50 cents.”

The amusing reports above are just a sample from BYU’s popular Police Beat, found in every Tuesday edition of The Universe. The crimes, for the most part, range from mysterious figures on campus to bike thefts.