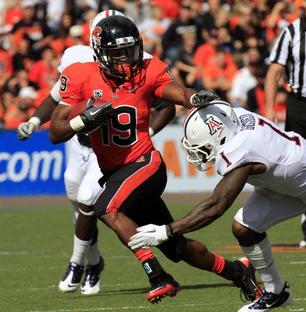 BYU vs. Oregon State: The matchups

The Cougars travel to Corvallis, Ore., to play their first road game since the second Saturday of September. They’ll be taking on an Oregon State team that had a slow start to their season, but has shown some life recently.

They’re coming off of the 37-27 win over a not-as-good-as-anticipated Arizona team. The loss lead to the firing of their head coach, Mike Stoops.

So what type of team is Oregon State and what can fans look for come Saturday? Well, they’re a young team that starts and plays a lot of young and inexperienced players, including their freshman quarterback Sean Mannion, 6-5, 218.