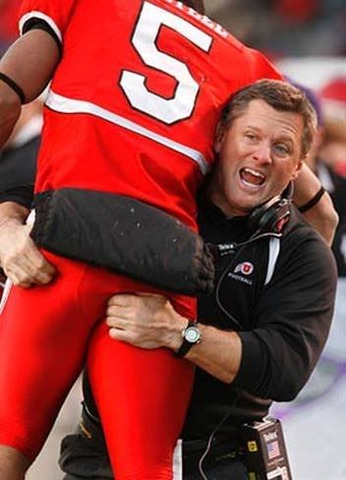 BYU vs. Utah: A Mormon rivalry

Sports rivalries are nothing new, but when you add religion to the mix, that can create some extra drama. A Sports Illustrated feature describes the anguish Kyle Whittingham felt between coaching football at his alma mater Brigham Young University or—where he ended up—with the University of Utah.

In a twist both unique and cruel, he had been offered—on the same day—the head coaching jobs at BYU and Utah, the principals in a rivalry whose intensity often crossed the line into ugliness. Conflicted barely begins to describe how he felt.

Whittingham had been a star fullback and linebacker at Provo High in the mid-1970s before crossing the street, literally, to play at BYU, as would his three younger brothers and as had his father, legendary wild man and former NFL linebacker Fred (Mad Dog) Whittingham. A brawler and partier as a young adult, Mad Dog married a BYU cheerleader named Nancy Livingston, who by all accounts had a civilizing influence on him. Eventually he was persuaded to join the Church of Jesus Christ of Latter-day Saints.
Read the rest of this story at getreligion.org