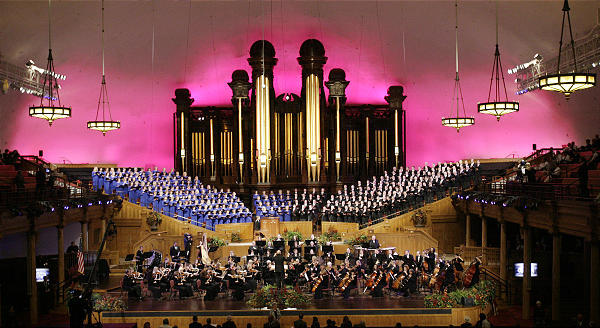 Behind the scenes with the Mormon Tabernacle Choir

For the next half-hour, the Tabernacle will be filled with the glorious sounds of "Music and the Spoken Word." And not only this building, but through the magic of radio, television and cable, the sounds will go out to fill the homes and buildings and centers served by about 2,000 stations around the country.

It has been that way, week in and week out, for 82 years now, the longest-running, continuous broadcast in the country.

Today's broadcasts, of course, are much different from those in 1929, initiated by LDS Church President Heber J. Grant. On July 15, as the famous story goes, KZN radio, forerunner of KSL and a stepchild of the Deseret News, temporarily went off the air so that its only microphone could be transported to the Tabernacle, where a technician perched atop a 15-foot ladder could hold it for the 30-minute musical program.