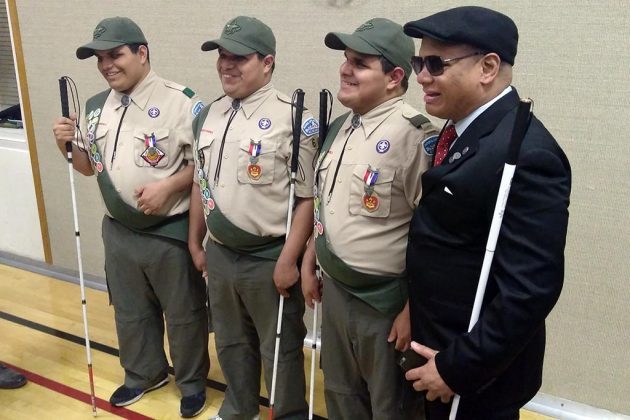 Last year, we shared People's story of a blind, LDS Attorney who adopted three blind triplets and gave them new hope and purpose in life.  Now, these three young men have earned their Eagle Scout awards through the Boy Scouts of America. Such an accomplishment is no small task, but these boys were determined to prove that "blindness . . . is no big deal."

As elementary school students, blind triplets Leo, Nick and Steven Cantos were bullied, had few friends and no role models.

But that changed when, at the age of 10, blind attorney and Crystal City resident Ollie Cantos became their mentor after learning about them through a friend at church. He legally adopted them two years ago, and turned their lives around.

“I didn’t have friends, my brothers were the only people, that was it,” Nick Cantos said. “I was essentially shut in for seven years, and I was a violent kid. I got into fights with people, because I was being bullied in school. It ended up getting so bad that I wanted to end [my life]. Dad really saved my life.”

A ceremony on [October 25, 2017] marked how far they have come, having also graduated from Wakefield High School earlier this year. At The Church of Jesus Christ of Latter-day Saints in Alexandria, the brothers became the first ever blind triplets to be honored as Eagle Scouts in the history of Boy Scouts of America.

Read the rest of this story at arlnow.com