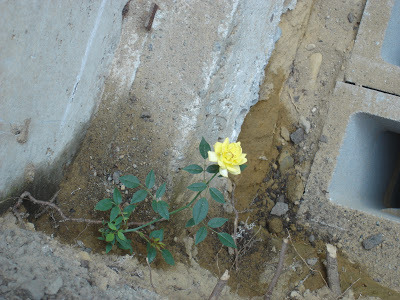 Bloom Where You're Transplanted

When we bought our house, two rose bushes flanked the koi pond.  They were not dramatic, prize-winning roses, but their miniature blossoms were pretty and cheerful.  They had been planted in decent soil, and they thrived there.

A few years later, it became necessary to refurbish the pond.  The rose bushes were in the way.  We did not want to lose them, but weren't sure where their final locations would be.  So my husband and a helper dug up the bushes, put them in two big plant pots, and moved them to other parts of the yard.

The yellow rose bush took the transition fairly well.  I watered it, and it stayed green and began to bloom.  I watered the pink rose bush, too, but it did not respond.  Within a couple of days, all its leaves and buds had turned brown and fallen off.  My husband thought his helper must have cut off most of the roots in the transplanting process.  It couldn't absorb the water we gave it.  I sort of gave up on the pink rose bush.

Read the rest of this story at mormonmommyblogs.blogspot.com