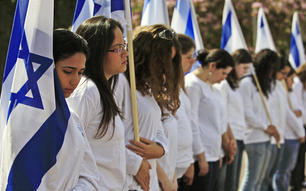 In 1894, Alfred Dreyfus, a young French artillery officer of Jewish origin, was framed and unjustly convicted of spying for Germany. He was sentenced to life imprisonment in the distant, dreaded penal colony called Devil's Island, and placed in solitary confinement.

His trial, and the long, tumultuous, ultimately successful campaign to exonerate and free him, constitutes its own dramatic story.

Covering the Dreyfus case was an Austrian journalist named Theodor Herzl. Himself an assimilated, secularized Jew, he was horrified to see Paris mobs chanting "Death to the Jews!"

Badly shaken, Herzl concluded that Jews would never really be accepted in Europe, that they needed to move elsewhere and defend themselves.