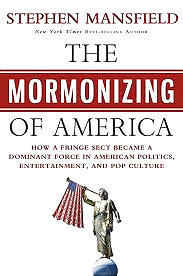 "We're going to have a collision on Mormonism," said Mansfield, who has just published "The Mormonizing of America" through Worthy Publishing. The book chronicles what he calls the "unprecedented leap forward" The Church of Jesus Christ of Latter-day Saints has taken during recent years in terms of public acceptance.

Other authors – including Sen. Orrin Hatch, Lee Trepanier and Lynita K. Newswander, Anthony Sweat and Ryan Cragun and Rick Phillips – have similarly noted the rising profile of Mormonism in the public square. Some, like Mansfield, are not LDS but are interested in the phenomenon from a sociological and/or political perspective. Others, like Sen. Hatch, are devotedly LDS and want to explain their church or defend it against perceived attacks from the outside. And others, like Cragun and Phillips, are "former Mormons" who feel they are uniquely qualified to explain the church and its doctrine, policies and practices.