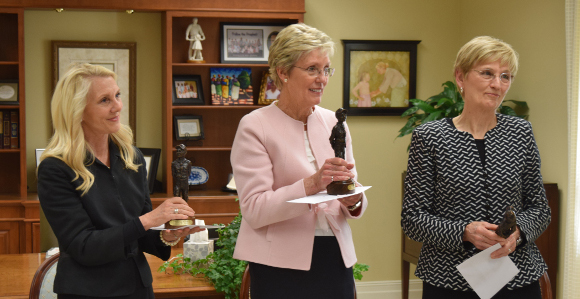 The Boy Scouts of America recently held a special presentation honoring three former women leaders in the Church for their service to the organization.

The Boy Scouts of America recently thanked the former Primary general presidency for its support of the national organization that includes hundreds of thousands of LDS boys.

Sister Rosemary M. Wixom, Sister Cheryl A. Esplin, and Sister Mary R. Durham were honored on April 1, 2016, for their service to the BSA at a special presentation at Church headquarters. All three women, during their time in the Primary general presidency, served as national volunteers with the BSA. Sister Esplin and Sister Durham were members of the BSA’s National Advisory Council, while Sister Wixom served as a member of the BSA National Executive Board.

The three women were released from their callings on April 2, during the 186th Annual General Conference of the Church.