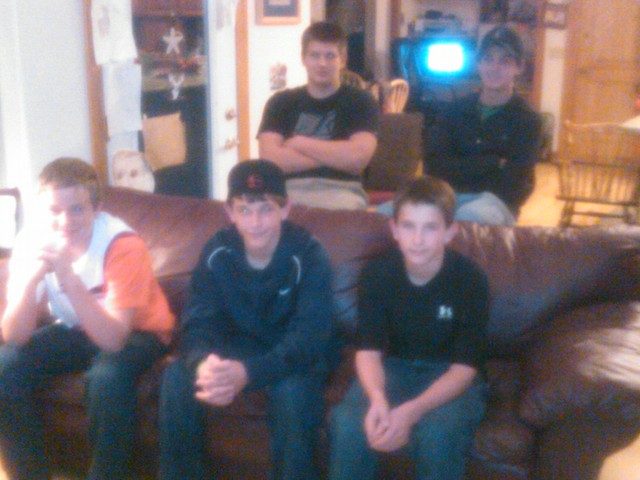 What started out as a hunting trip to see who could get the biggest elk, ended with five boy Scouts saving the lives of their family.

Brady Sawyer (16), Max Butler (15), Gus Butler (14), Adam Cook (14) and Chase Cook (14) were hunting earlier this month at the Little Sheep Creek trailhead near Lima, Mont. When they discovered their fathers, Randy Cook, Bret Butler and friend of the family Carl Saunders unconscious in a different tent.

Max recalls the smell of propane gas and vomit when he first realized there was a serious problem and they all knew to get help. The boys immediately took action to make sure their fathers and friend were in a clean place before two of the boys drove down the mountain to call for help. Max told his younger brother Gus that if the men stopped breathing they needed to do CPR.

“The entire drive down the mountain,” Max said, “I was praying and hoping we did everything right and knew we had to leave it up to God.”

Back at camp, the three younger boys pulled the unconscious men out of the dirty tent and into their clean tent and made sure there was plenty of ventilation. “We didn’t know what to do,” Adam said, “but it came to us as we were working.”

The boys cleaned out the vomit from the men’s mouths and followed the steps they were taught by their scout master, Bret Butler, by making sure to call for help, take their pulse, clear their airway and check their breathing.

“I couldn’t believe this was happening,” Gus said. “Dad [Bret Butler] was Scout leader and his first aid took over me and I knew what to do.”

While the three boys were waiting for the ambulance, a few hunters came to their aid. They helped the boys put the men in a pick-up to haul them down the mountain where the ambulance would get to them faster. The ambulance arrived in minutes and the men were rushed to the hospital, but news at the hospital wasn’t positive. Doctors told the boys that there is a small chance for complete recovery and a good chance for brain damage. Nine hours with a leaking propane heater is a very serious condition. “We should have lost them,” Brady said.

With two of three men at home with a full recovery, this accident is nothing more than a miracle. Carl is still waiting for an infection to heal before he can be released from LDS Hospital in Salt Lake City. He is expected to be home soon.

All five of the boys credit the Boy Scouts program for helping to keep them calm. The thought of losing his father made Chase cry and pray, but he knew that the Lord and Scouting program were a big help.

“In Boy Scouts,” Chase said, “we are preparing for what could happen in the future.”
Brady contributes their fast action to the scouting program. “I think we would have been more freaked out without Boy Scouts,” he said.

For four of the boys, having their father home for Thanksgiving is a miracle. “We are going to have our own dad who shouldn’t be around,” Chase said.

Bret, Randy and Carl call these boys their heroes and know that if it weren’t for their quick attention, their outcome would have been different.

“I don’t want my dad to be angry,” Adam said. “I won’t leave the house without telling him I love him and giving him a hug.” For Chase, knowing that his father, Randy, is alive has strengthened their relationship. “There is a bond that will never be broken between us,” Chase said.

The thought that he may have a different dad, with brain damage, was hard for Gus to take, but through this accident it has made him appreciate his father more and their relationship has grown stronger.

For Brady and Max this accident marks the end of their Boy Scouts journey. Max has earned his Eagle and Brady is waiting for the board to approve his Eagle project. The other three boys have learned that Boy Scouts isn’t boring or doing things they will never use, but that it is a great teacher to them. Chase, Adam, and Gus take their scouting serious now and know that they will never know when what they have learned will come in use.