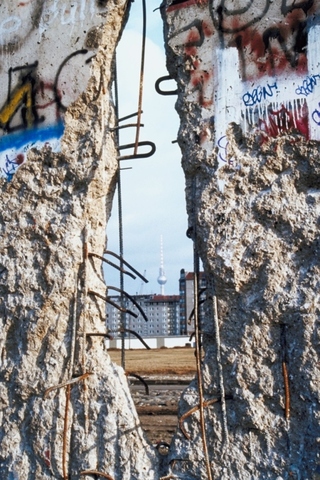 Saints behind the Curtain Under communist rule, all Saints in the GDR experienced barriers to living as they wished, though they varied according to time and place. In some parts of the GDR, such as Chemnitz and Leipzig, where communism had been popular well before WWII, churches faced greater opposition than along the Czechoslovakian border in the south, where small protestant churches had long flourished and local officials were less restrictive. But some challenges were common to all citizens.

"Officially you had a right to live according to your beliefs, but in reality it was a little bit harder," says Schütze.

The most common disadvantage was in educational opportunity. Even if Church youth participated in state-sponsored programs like the Free German Youth or Jugendweihe (which were required for college admittance and caused some parents concern), youth had difficulty getting into college. "Religion was never admitted as being the cause - it was illegal to discriminate against religion - but it was done," says Raymond Kuehne, historian and author of Mormons as Citizens of a Communist State. Many eventually did get to college, but they had to go alternate routes, and it took longer.

But there was plenty of work to be done. "We always had something to do; it kept us busy. We had so much opposition that we had to learn what Church doctrine really was to have a strong faith," says Schütze. "We didn't have time to think about our problems."

Church members in the GDR were busy enough keeping the gospel alive, and Saints in other Eastern Bloc countries faced similar struggles. In Poland, for example, so many members left the country that the Church's only branch was discontinued in 1971. And after the Czechoslovakian government dissolved the missionary efforts there in 1950, members were prohibited from worshipping in public and were given limited contact with the Church outside its borders.

Perhaps the greatest challenge for the Church in Central and Eastern Europe was the absence of full-time missionaries. In East Germany, foreign missionaries could not reenter after World War II. Full-time missionaries from within the country were called, but this later hurt their chances for employment (the government labeled them "unproductive workers" for their service without pay). The Church then tried part-time missions, in which missionaries held full-time jobs and did service on evenings and weekends, but it was too difficult. After 1961, the number of converts in the GDR plummeted to six per year.

Even under an oppressive government, however, the Saints found peace and comfort through worship. "There was freedom and liberty within the walls of the Church," Schütze says. "That was a significant lesson for me to learn - the gospel principles are principles of freedom, liberty, free agency - and that is what we did not find so clearly outside the Church."

But within the physical walls of the Church, members still had to watch themselves. By blackmailing members, the Stasi (secret police) established unofficial contacts within the Church, and those members were forced to report on the Church's activities.

Henry Burkhardt, who essentially led the Church in the GDR, was aware of these informants. Most members who participated did so unwillingly, and Burkhardt comforted some by saying, "As long as you're honest, we won't have trouble."

During the entire existence of the GDR, Church leaders behind the Iron Curtain and outside it worked tirelessly for a better relationship with the government and for greater advantages for the Church. They needed missionaries. They needed buildings. They needed a way to attend the temple. Then starting around 1968, a new day for the Church in Eastern Europe would begin.