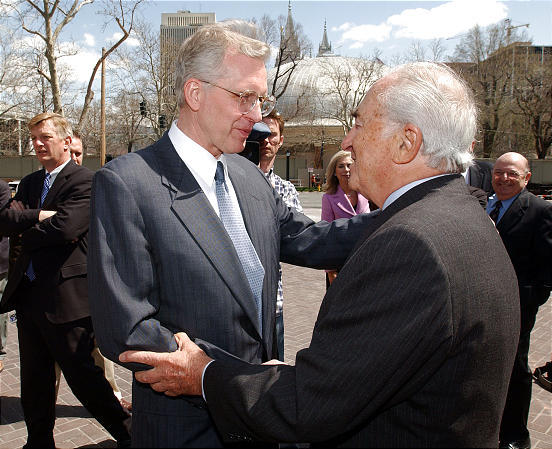 Breakthrough in relations between Jews, LDS

Official Church InfoWhat They're Saying About "Us"

At first blush, one might think that Mormons and Jews have little in common beyond their status as minority faiths in America. But over the past few years we have actually found a great many commonalities, and these have been the focus of our efforts at the Anti-Defamation League to reach out and solidify the relationship through dialogue.

The goal has been to deepen our bonds and discuss ways to work together to reduce prejudice in the United States and the world.

As part of this ongoing dialogue, I had the privilege last spring of spending several days in Salt Lake City, meeting with the leadership of the Church of Jesus Christ of Latter-Day Saints – commonly known as the Mormon Church – and visiting their incredible facilities, including the state-of-the-art church where the Mormon Tabernacle Choir performs.

As minority faiths in the world, we share many concerns. Mormons and Jews both continue to face prejudice and discrimination in our own country and around the globe. Indeed, we discussed the troubling rise in anti-Mormon sentiments during the 2008 presidential campaign when Massachusetts Republican Gov. Mitt Romney, an LDS member, sought the Republican presidential nomination.
Read the rest of this story at deseretnews.com