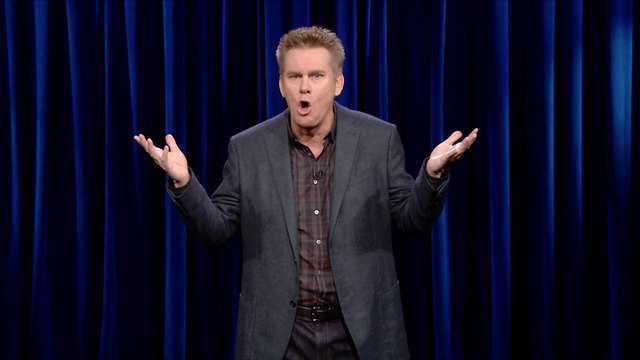 It's no secret: Mormons love Brian Regan. In fact, he broke Jerry Seinfeld's record by selling out five shows in Salt Lake City in March 2010.

But who wouldn't love Brian Regan? With clean comedy that will make your sides hurt from laughing, it's no wonder Regan is so successful.

Brian Regan is just a hilariously funny guy who doesn't need to rely on shock-value or language to make people laugh. "Sometimes I think people who do participate in shock-value comedy or shock-value anything, sometimes the reaction they're getting is just, 'Oh my gosh, I don't believe he said that!’” Regan told the Deseret News. "And it's like, I don't want to get that kind of reaction. I want people to go, 'Oh, hey, that was funny. That was funny, and I'm going to laugh.’”

"As happy as I was to make the thousands of people in the audience laugh, I'm even more amazed that [my son] thinks I'm funny," he told the Deseret News. "I'm proud to say that (my kids) are proud of me. And it just means the world to me."

And it seems like Latter-day Saints' interest in Brian Regan is mutual. "I like anybody who likes me," Regan said after performing for college students in Utah. "And it's always interesting when young people are interested in clean comedy."

Recently, on Facebook, Regan posted several photos of LDS temples as well as photos of other notable buildings in the cities he would be visiting soon, pictures that didn't escape the attention of many Latter-day Saints:

In fact, one of these pictures even prompted one commenter, Katherine Evans Reed, to issue an invitation to the comedian: "Excellent picture of the Idaho Falls Temple! Feel free to wander the grounds a bit while you are there!"

Whether or not Regan visits an LDS temple, it's encouraging to know he finds their architecture beautiful enough to include alongside other iconic monuments.