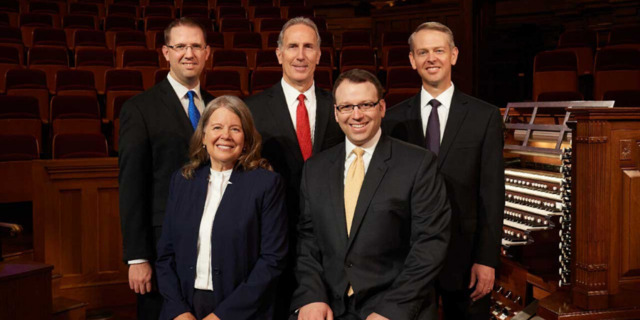 Bring the Temple Square organists into your home through streamed recitals

The current COVID-19 pandemic temporarily halted the organ recitals in the historic Tabernacle, which have been a tradition for more than a century. But noon recitals will now resume via the internet, without an audience, several days a week. That means organ enthusiasts and fans of the choir and its weekly broadcast, “Music and the Spoken Word,” can enjoy the music of the famous organs at Temple Square wherever they are in the world.

The opening event, “Piping Up: Tabernacle Organists in Concert,” will air June 17, 2020, at 7 p.m. Mountain Daylight Time on the choir’s YouTube channel, the choir’s website and the Church’s live watch page. The 45-minute concert will include a wide variety of music from classical to traditional hymns and spirituals.

“I’ve continued to play, arrange and compose on the organ during these past few months,” said principal organist Richard Elliott. “I am thrilled to be performing again with my fellow organists, sharing our music with others, especially during these troubling times.”

Following the opening event, The Tabernacle Choir at Temple Square will stream organ recitals weekly, starting Monday, June 22. The 30-minute organ series, called “Piping Up: Organ Concerts at Temple Square,” will be streamed Monday, Wednesday and Friday at noon MDT. Each day, one of the five organists will perform.

The weekly recitals can be watched on the choir’s website, the choir’s YouTube channel and the Church’s live watch page. The kickoff concert on June 17 will be posted on YouTube immediately after the livestream.

The online organ recitals will move to the Conference Center organ starting July 13 to accommodate scheduled renovations to the Tabernacle organ.

Read more about the Organs and Organists at Temple Square.