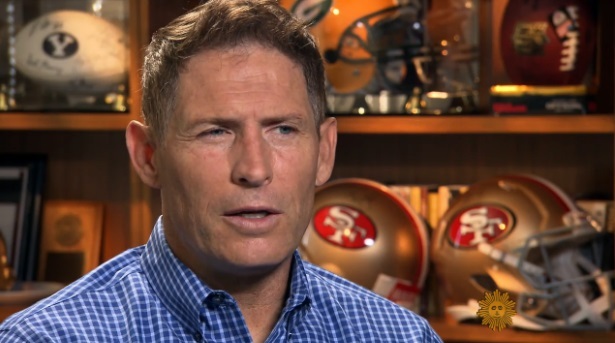 On his most crippling days of anxiety, Steve Young described the fear he experienced as an athlete in an interview with CBS: "You wake up and you see the crack of the morning dawn . . . and you would have this dread."

To look at Steve Young's life, you would think he was a man who had it made. A straight-A high school student who was captain of the football, baseball, and basketball team, Young went on to become an All-American quarterback at BYU before signing a record-breaking NFL contract for $40 million—not to mention the fact that during his time in the NFL, Young earned a law degree from BYU.

But being known as the 40-million-dollar man wasn't a perk in Young's eyes. Instead, it created a "horrific weight."

"As soon as I committed [to serve a mission], I started to feel anxious. A mission is a great opportunity. But I knew myself too well. There was no way I’d survive being away for two years. The thought of total separation overwhelmed me. I didn’t understand the source of my fears. But I knew they were real.

"There’s no way, I told myself. I’ll never make it. I was barely hanging on at BYU. I was calling home a few times a week. The dresser drawers in my dorm room were empty because I never bothered to unpack for the entire fall semester. The more I thought about a mission the sicker I became."

It wasn't until his career in the NFL that a therapist diagnosed Young with a severe case of separation anxiety that then turned to pre-game anxiety.

During this time, the only person who knew about his anxiety was Young's roommate, Brent Jones, who roomed with Young while he played with the 49ers.

Young's self-consciousness and worry reached the point where it was nearly incapacitating. That's when a chance conversation with fellow Latter-day Saint Stephen Covey, author of the bestselling book The 7 Habits of Highly Effective People, changed Young's outlook.

Young decided to forget comparisons and expectations and focus on how good he could become. That mentality led Young to become the 49ers starting quarterback where he led his team to a Super Bowl victory.

Though Young's career was taking off, he still suffered anxiety, especially over the expectation to get married. In an interview with 60 Minutes when he was 34 years old, Young said: "Brigham Young once said right here on these grounds that anyone over 27 years of age is a menace to society. So here's my grandfather telling me to get with it. You don't think I feel the pressure?"

It still took years after this interview before Young married, an event that came after a blessing from Elder Richard G. Scott helped calm his fears and helped Young find his future wife.

Despite struggling with anxiety for most of his life, Young has finally overcome it for good.

"It really is in the rearview mirror," he told CBS. Young credits his faith and family for his new life, which he characterizes as "pretty sublime" in his autobiography.

"These days my life is pretty sublime. I spend a lot of time in my minivan, carpooling kids to school and activities. I love coming home from work and throwing balls in the backyard with my kids. I’ve also discovered I’m a pretty good cook. . . .

"At this stage of my life, I’m most grateful for two things: my family and my faith. . . . I’m also grateful for the angels who still remind me what’s most important in life.

"Playing in the NFL was a great life. But the life I have today is even better.

Lead image a screenshot from the CBS interview

Learn more about Steve Young's faith and family as well as how he overcame his anxiety with QB: My Life Behind the Spiral.