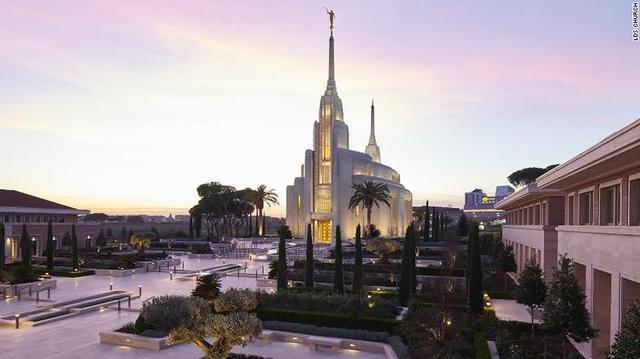 From the pope to our prophet, many church leaders of The Church of Jesus Christ of Latter-day Saints and the Catholic Church have worked closely together in recent years to champion social causes.

In 2014, President Eyring spoke at the Vatican during an interfaith event on marriage, stating, "We must find ways to lead people to a faith that they can replace their natural self-interest with deep and lasting feelings of charity and benevolence."

In 2018, The Church of Jesus Christ of Latter-day Saints honored His Eminence Cardinal Donald Wuerl, who stated, “We, Mormons and Catholics, stand together in our recognition [of] freedom of religion [and] freedom of worship—the focus of the 11th article of faith in the Mormon Church."

From strengthening families to defending religious freedom and providing humanitarian relief to worshipping together, these two churches have shared many beliefs and dialogues. And now, they are neighbors in "the Eternal City."

CNN featured the Church's new Rome Italy Temple in a recent article, noting, "While the building's spires don't reach the heights of St. Peter's 450-foot-high dome, the Pope's new neighbors hope their temple will also become a place of pilgrimage for spiritual seekers."

The choice of building a temple in Rome has roots as old as Christianity itself. "The early apostles served and lived and were martyred here in Rome," Elder Ronald A. Rasband told CNN, "so this is the place that our prophet felt the temple in Italy should be."

"Rasband says [Latter-day Saint] leaders discussed their plans with the Vatican and that the two churches often work together on social issues.

"'We are friends with the Catholic Church,' Rasband said. 'I have been part of an official delegation to go to the Vatican and meet with cardinals and others about not only this project and not only our church in Italy but relative to the interrelationship we have with our friends, the Catholics, all over the world, whether it has to do with humanitarian work, refugee work or freedom of religion in the public square.'"

About the new temple and Latter-day Saint beliefs, CNN states, "At the heart of a [Latter-day Saint] temple is a small pool, a full-immersion baptismal font, where [Latter-day Saints] baptize their dead ancestors by proxy in a ceremony central to their belief that families are bound together for all eternity and that only the baptized can enter the Kingdom of God."

It seems only fitting that this everlasting work should now commence in the "Eternal City" where Jesus Christ's apostles testified of His life and saving grace.