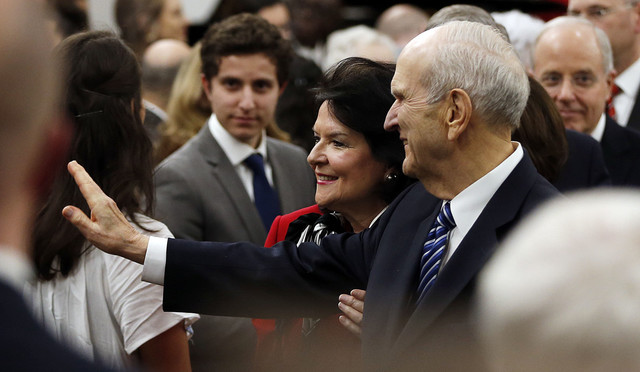 CNN Details the Remarkable Way President Nelson Receives Revelation: "This Is Moses in a Business Suit"

"When the messages come during the dark of night, Russell M. Nelson reaches for his lighted pen and takes dictation from the Lord," Daniel Burke from CNN writes.

"'OK dear, it's happening,' the president of The Church of Jesus Christ of Latter-day Saints tells his wife, Wendy Nelson.

"'I just remain quiet and soon he's sitting up at the side of the bed, writing,' she said in a recent church video.

"Sometimes the spirit prompts the prophet's wife to leave the bed, though she'd rather sleep."

"The Lord impressed upon my mind the importance of the name He decreed for his church," President Nelson said.

The CNN article quotes Kathleen Flake, an expert on Church doctrine from the University of Virginia, who says about President Nelson and other prophets, "There's no mistaking it, this is Moses in a business suit . . . someone who can lead people, write Scripture, and talk to God."

"Lots of religions talk about revelations. They fill much of the New Testament's last book and many parts of the older Hebrew Bible, from the burning bush that inspired Moses to the 'still, small voice' who whispered to Elijah.

"But many modern believers consider both Bibles to be closed canons, the last words we'll hear from God before the final trumpet blows. It's not that these religions consider prophesy passe. They just think the era of prophecy has passed. Even Pope Francis speaks of 'discerning' God's will, but rarely of revelations.

"Latter-day Saints, as they prefer to be called, believe in continuing revelation. Their canon is open, ready to be revised or supplemented by its top cadre of leaders, first among whom is the church's president, who is considered a 'prophet, seer and revelator.' In some circles, Nelson is called, simply, 'the Prophet.'"

Burke goes on to explain the history of modern revelation in the Church as well as how revelation has guided President Nelson's life since he was a boy. In addition, he captures much of the excitement Church members experience today living in a Church where we can see revelation in action. "People feel like this is very dynamic time in the church," Steve Evans told CNN, "and when you have a president who speaks openly about being led by God, that is very exciting. You feel like you have a purpose and that things are going in a positive direction."