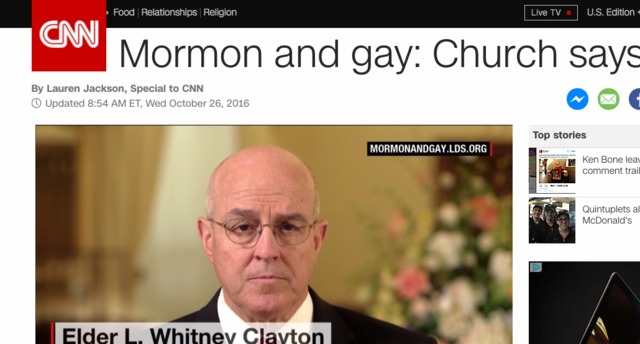 After the Church released its new website, Mormon and Gay, CNN shared some fascinating insights into this "significant" change as well as personal stories and reactions from gay Mormons.

As Mitch Mayne, a gay Mormon and blogger told CNN, "Above and beyond getting into the content of the website, the URL is absolutely fantastic—it's an inclusive statement." And Jessyca Fulmer, an openly lesbian Latter-day Saint, recognizes that this shift is "monumental."

Ricardo Rosas was the closeted father of six before he came out to his wife—and, on Tuesday, to the rest of the world.

A third-generation Mormon from Mexico City, Rosas went to church, served a mission and "did everything that was expected" of him.

Still, Rosas, 47, said he felt conflicted and didn't truly understand what was going on.

"For 40 years," Rosas said, "I carried the shame of those feelings... for most of my life I felt very broken."

It wasn't until Rosas started a new job that he discovered the resources he needed in an unlikely place: the headquarters of the Church of Jesus Christ of Latter-day Saints, as the Mormon Church is officially known, in Salt Lake City.

Lead image a screenshot from mormonandgay.lds.org.