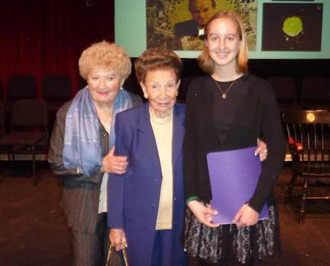 Natalie Larson, a 13-year-old member of the LDS Church from Orange County, Calif., recently won a national middle school poetry-writing content. The 12th annual Holocaust Art and Writing contest was sponsored by Chapman University and the 1939 Club, an organization of Holocaust survivors and descendants. For her efforts, Larson received a $500 prize and an upcoming summer trip to Washington, D.C.

Larson wrote a poem about Zelda Gordon, a Holocaust survivor born in Poland who now resides in Southern California. Gordon survived six death and concentration camps. Larson's poem describes Gordon’s courage in sneaking out after curfew to find bread for her friends in the ghetto, at considerable risk to herself.

The award was announced on March 4 during a ceremony at Chapman University in Orange, Calif. Following the ceremony, Larson had the opportunity to meet Zelda Gordon.