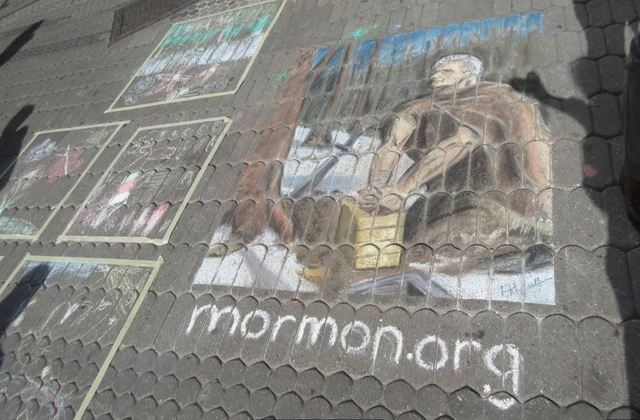 “I believe it’s important to be yourself as a missionary because God sent you to a certain area because of your specific personality and gifts,” says Emily Hyatt, a returned missionary who served from 2014 to 2016 in the Germany Frankfurt Mission. Sister Hyatt’s mission president encouraged that belief, challenging missionaries to use their specific talents to share the light of the gospel.

“I wanted to find a way to use my talents to spread the gospel,” Hyatt says. That’s why she and other missionaries in her area decided to put on a chalk art street display in the open square of Weisser Turm in Nuremberg, Germany. Because she wanted to capture something specific to her religion, Sister Hyatt created an intricately detailed picture of Moroni burying the gold plates that took over six hours to create.

“The drawing of Moroni made it really simple for us to explain the Book of Mormon to people who had never heard of it,” Hyatt explains. “We got the chance to talk to people who may never have
stopped otherwise.”