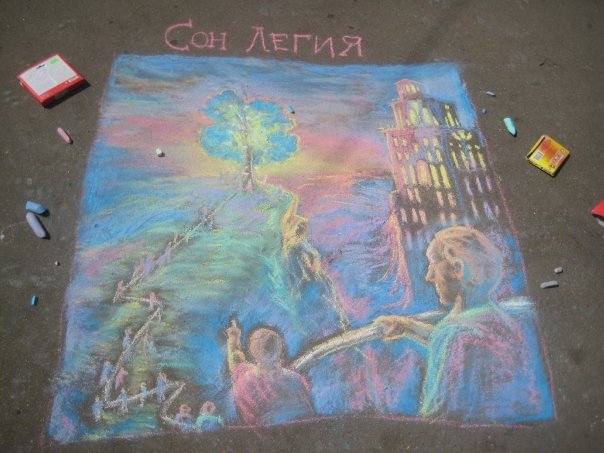 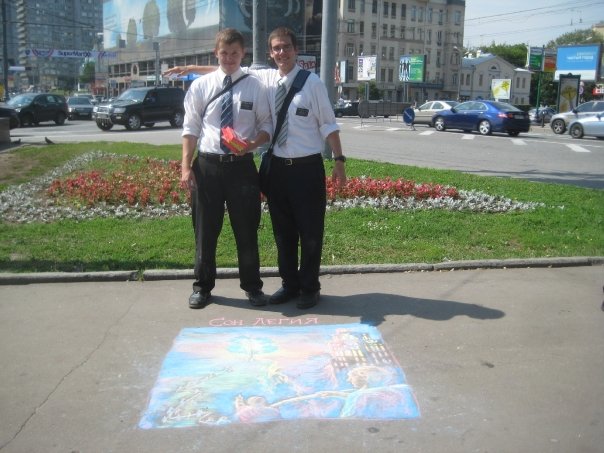 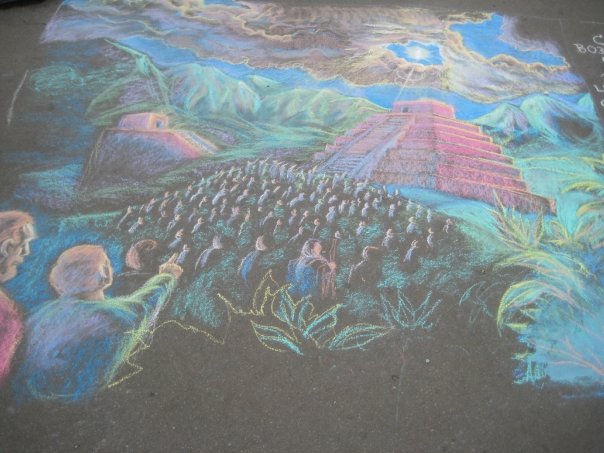 “Contacting people who have serious challenges trusting each other, let alone foreigners, made contacting like a stone wall many times in our mission,” says Paul Gallo, a returned missionary who served in Russia from 2007 to 2009. But Elder Gallo and Elder Jace Warren found a way to break down those barriers by drawing an image of Christ coming to the Nephites and Lehi’s dream of the tree of life in public centers in Moscow.

“Drawing the Savior’s coming to the Nephites drew people in in a way that touched their hearts,” Gallo says. “Russians are actually very emotional, sensitive people. They love art and beauty.” Around the artwork, Elder Gallo was sure to add scriptures from the Book of Mormon. “The written word is also very powerful for Russians. After breaking the initial barriers, the majority of those with whom I shared any bit of the Book of Mormon regarded it with deep reverence,” he says. Later, Gallo learned that in response to the chalk art he and other missionaries created, a man began investigating the Church, eventually becoming converted to the gospel of Jesus Christ.

The power Gallo saw on his mission that comes from chalk art has continued throughout his life. “I have fallen in love with drawing the Savior and often post my pictures on Facebook with a scripture, quote, or personal testimony. The Spirit prompted me to do this about a year ago, and I see how much these drawings affect others in a positive way—even people who are not members or who have left the Church,” he says. “God does give us talents for a reason and wants us to develop the raw material in our souls for His glory.”

Do you have chalk art to share? Tag us in a post or let us know in the comments.

@LDSLivingMag More #LDS Chalk Art from a few years ago in Buffalo, NY pic.twitter.com/jqw1Sqp1Zo — Not Yet Mormon (@NotYetMormon2) May 28, 2017