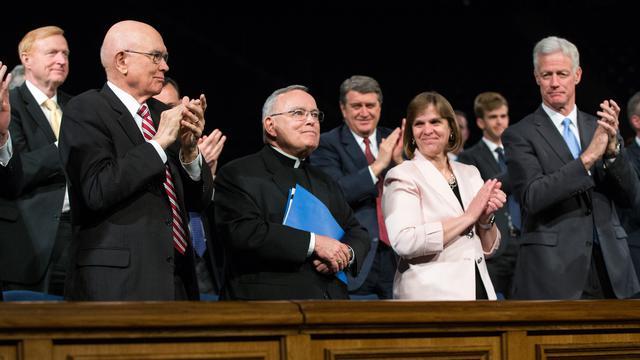 Catholic Archbishop: Mormons and Catholics Need Each Other

Alongside Dallin H. Oaks, Catholic Archbishop Charles J. Chaput spoke to many Latter-day Saints, sharing the important reason Mormons and Catholics need and can support one another in our fight for religious freedom.

Catholic Archbishop Charles J. Chaput of the Archdiocese of Philadelphia urged students at Brigham Young University to help defend faith and religious freedom. “We need to wake each other up to see the world and our nation as they really are — the good along with the evil. We need to support each other in the work for religious freedom we share.”

Archbishop Chaput spoke during a forum in the Marriott Center on the Provo, Utah, campus on Tuesday, March 22, 2016. He was joined on the stage by Elder Dallin H. Oaks of the Quorum of the Twelve Apostles of The Church of Jesus Christ of Latter-day Saints. The private university is owned and operated by the Church.

“I’m here today because I believe the friendship of the LDS and Catholic communities is important,” said Archbishop Chaput. “We need to treat each other as friends, not enemies or strangers. We need to learn from each other’s successes and mistakes.”